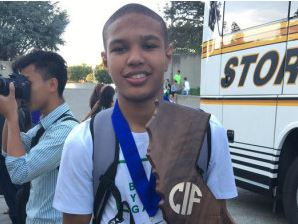 After multiple overtures from DII and NAIA schools and being accepted at both UC Irvine and UC Santa Barbara, Manteca High’s Dwight Young Jr. has decided to cast his educational lot with the latter.

But he isn’t quite done with basketball. Gaucho Coach Joe Pasternak has already offered a walk-on position to Young Jr. A 5-foot-11 guard, he averaged 15.3 points per game as a senior. He shot 90% on 127 free throws as well as 35% on 240 trey attempts.

In 2016-17, Manteca finished 24-7 overall, 14-0 in the Valley Oak League. This after winning the state championship the previous season.

»  Read more in-depth analysis of the basketball recruiting process in my `Recruiting is a Seriously Funny Business’ cornerstone article.