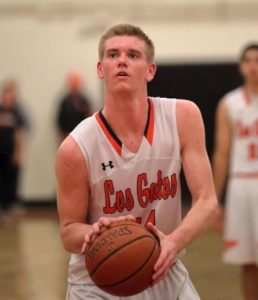 What’s that line, ‘a match made in heaven’? Dylan Belquist is a 6-foot-7 three-point shooting wing out of Los Gatos High who loves to zoom up and down the floor and USF is a team that thrives on the three ball and a fast pace. This pairing has the makings of a happily ever after scenario.

Asked about his decision to join the Dons, Belquist explained, “it’s the best fit for me. The team is very young but really good and they had a lot of success last year.” Coach Kyle Smith’s crew finished 20-13 overall and 10-8 in the West Coast Conference (WCC).

Belquist added, “”I’ll be playing the three in a spread out offense. It’s a very unselfish group who want to get their teammates open and make the extra pass.” 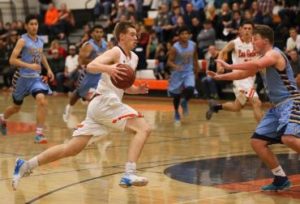 A little known factor in USF’s favor is a birthright of sorts. “I was born in San Francisco and lived there until I was five.” So the lure of “doing it for my hometown” was added incentive.

Smith and the Dons were the first to offer, doing so in Belquist’s sophomore year. He made the call a few days after his official visit to The Hilltop this past weekend. With Frankie Ferrari and Souley Boum acting as player hosts, “I was really welcomed. The guys seemed interested in me.”

Asked what he will bring to the team, Belquist said, “I’m a hard worker so I’ll be in the gym for hours. I’ll do whatever it takes to win.”

He offered this advice in looking back at the recruiting process: “make sure you know what you want in a school and that it’s a good fit.” 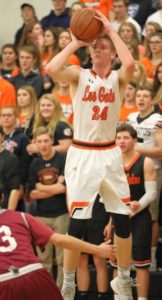 Besides home games, Belquist’s family and friends will also enjoy the opportunity to catch him in action nearby versus fellow WCC opponents Santa Clara, St. Mary’s and even Pacific.

Now able to focus completely on his final high school season, Belquist said, “We should have a good team with 6-foot-3 Alex Braken-Guelke and 6-foot Frank Polisso at the point.” Both are seniors. He added that 6-foot-3 senior Robert Nelson will join the team when he’s finished quarterbacking the Wildcat football team.