Chris Simpson to the Mile High City | Nor Cal Basketball 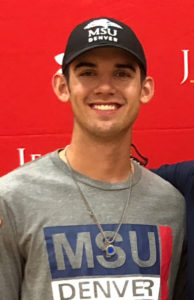 6-foot-6 Jesuit High talent Chris Simpson is taking his sweet jump shot to Metropolitan State in Denver for multiple reasons but the first and foremost one coincides with the foremost rule of recruiting: go where you are most wanted.

“They (the Metropolitan State coaching staff) have been in contact with me ever since July,” Simpson said. “A coach texted me almost daily since August. They showed the most interest and been there the longest for me.”

Once he tripped to Denver, “I felt really wanted, they told me I was their #1 recruit. It felt like I joined a family when I committed. I fell in love with the campus, the program and the city.” What also helped was each member of the Metropolitan coaching staff being a former shooting guard in college.

Officially offered on his recent visit, Simpson wasn’t pressured but rather was told to think about it by the Roadrunner coaches. With his father alongside him on the trip, they discussed the merits of a Metropolitan scholarship. Then Simpson called and talked with his mother. At the airport on his way home, “I called Coach (Michael) Bahl and told him I wanted to be part of his program,” adding “my family is with me on this.” 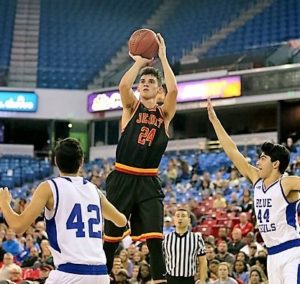 Metropolitan State is a highly successful DII program and a member of the Rocky Mountain Athletic Conference (RMAC). The Roadrunners won DII national championships in 2000 and 2002, finished 32-3 in 2012-13 as well as 32-2 in 2013-14 alongside winning numerous RMAC titles.

Another plus recruiting process element took place when Simpson reached his hotel. “They had the placards and trophies from their Final Four appearances set up in my room.”

So how will he be utilized? “It’s early but probably as a two and a three. If I grow more, I could play a stretch four if need be.”

Roadrunner fans will see “a lot of emotional commitment to the team, I’ll be a good teammate. I’ll bring my leadership and three-point shooting skills, I can rebound and push the ball up the court and pass. I hope to have a big impact.”

He is looking to major in psychology and minor in criminal justice. “I’d like to be part of the FBI.”

Simpson will soon have a signing day either at Jesuit High or his home.