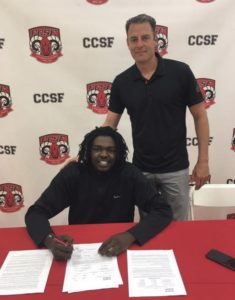 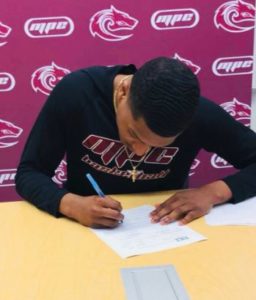 LaShanti Brown: “Congratulations to my son Deshawnte Collins for receiving a scholarship with Sonoma State University. Today he signed his letter of intent and at the end of the month he will be graduating with his AA from MPC. I swear God Blessed us when he made us his parents. We are so proud of him and all the hard work he put in. I thank GOD for being with him every step of the way as he went through this process. Its bitter sweet because he was a little sad that his Uncle David couldn’t see him. But I told him he is watching over him and would be very proud and bragging to everyone…lol. Thank you to all of the people who helped and supported him along the way. I truly appreciate it.”

Kenny Olsem: “Blessed to say I just signed my commitment to play basketball at Sonoma State on a scholarship! So excited to start this next chapter in life.. Shoutout my people, you know who you are❤ ” 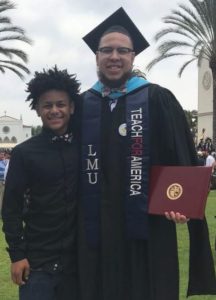 Earl Allen Jr: “Another Dragon hooper getting his Master’s Degree! Congrats James Townsend!!! Well done!!!!!” The former UC Santa Cruz talent is teaching in Sacramento while he was earning his advanced degree.

Verbal Commits: “Former Sacramento State G Jiday Ugbaja is transferring to San Francisco State (DII).” He earned his degree as a Hornet and will play one more season in The City. 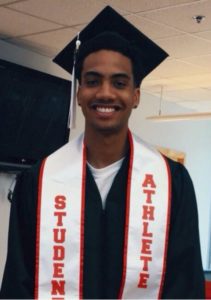 CCSF Mens Basketball: “Congrats to former Ram Gabe Bealer on graduating with his bachelors degree from the @uofutah” Out of Antelope High and CCSF, Bealer buried 50 treys for the Utes this season. 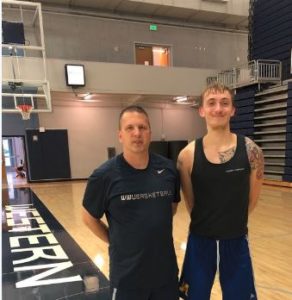 Verbal Commits DII: “Alaska Fairbanks G Davis Kimble (JR) is leaving the program.” Out of Hayward High and Cañada College, the 5-foot-11 Kimble averaged 11.1 points per game and has one year of eligibility remaining.

There are a number of northern California talents who participated, including:

Strong, physical player with good athleticism, is very tough and finishes through contact whether attacking the basket or grabbing a rebound to put it back up. Post-up game is pretty good has nice moves with a gentle touch around the rim.

Athletic, quick point guard with nice skill set, confident shifty ball handler with great moves, fearlessly attacks the cup and finishes over and through defenders, great 1 on 1 moves and gets the angle he wants to score, has long arms which helps with getting deflections and steals.”

The 8th annual Bay Area Memorial Day Classic will be held from Saturday to Monday May 26-28 at Jamtown in Oakland and Ultimate Fieldhouse in Walnut Creek. The event will have teams in four divisions: 17 Elite, 17 Varsity, 16/Junior Varsity and 14-15/ Frosh. Championships in all divisions will be held on Monday, May 28 at Jamtown.

MVP awards will be given in each division. A report on the event will be done by the Hoop Review scouting service that will be sent to college coaches and various internet sites.

Each team will play three pool play games and then single-elimination playoffs. Cost is $495 per team with discounts for 3 or more teams. To register go to hoopreview.net and click on registration at the top.

Teams participating in the Memorial Day event will have first priority for the July 13-14 Nor Cal Summer Tip Off live period event.

For further information contact Gerry Freitas at 408-998-1327 or email: gerryfreitas@hotmail.com.

O Cauchi: “French forward Remi Barry has signed a deal for the remainder of the season with Pro B side Poitiers Basket 86, the team announced. Barry recently played in Croatia with KK Jazine, where he averaged 18.8 points and 6.8 rebounds per game.”

Barry attended (but never played at) Del Oro High before moving on to New Mexico State. He did play for the YBA Dawgs.

This is the real grind, living with a debilitating and ultimately fatal illness.

“Why do we have hot takes about new NBA coaches when we don’t know how to judge them? Why do we act with such certainty that a coaching hire is good or bad?”—Tom Ziller

The same applies to college coaching new hires as well as newly signed college recruits. We all have our opinions but none of us can foresee the future. But that doesn’t stop us from praising or ranting.