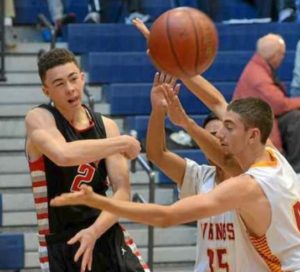 Need some points alongside a halftime concert? Put a basketball or a guitar in his hands and multi-talented Miles Squiers of Redwood High and the North Bay Basketball Academy (NBBA) is equally proficient. Named a Marin County Athletic League First Team honoree for his production as a junior, the 6-foot-3 guard is also at home performing music. So much so that he has posted his own songs on-line.

But don’t think for a moment that being strapped up with his guitar interferes with his on-court commitment.

“Basketball has always been a large part of my life,” Squiers explained. Besides his father being a hoops influence, he cited two other family members as playing big roles. “My grandfather, James Squiers, coached for over 40 years and is the fifth most winningest coach in Iowa high school basketball history and I work out with my older cousin when I’m there during the summer. We really push each other.”

His current schedule amply demonstrates his dedication. “Every Saturday and Sunday, I have an NBBA practice or game, on Monday and Wednesday, I’m lifting at school and in open gym on Tuesday and Thursday.”

Somehow, he also find the time to train kids in the finer arts of basketball.

Squiers detailed “my defense, having a really good motor and being a pretty good shooter as his basketball strengths. “Conversely, “I’m working on finishing and being more consistent with my free throws.” 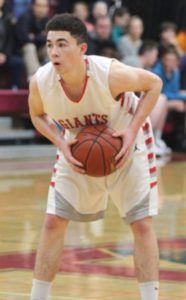 He plays multiple roles depending on which uniform his is sporting. With Redwood, “I’m the first option when it comes to scoring and I call out plays.” On his travel team, ” everyone plays at that level so it’s a collective effort and who is feeling it the most.”

A raucous atmosphere was the common element in his best basketball moments to date. “As a sophomore, I was struggling to get playing time. We were playing in a loud and packed gym at Marin Catholic against Joey Calcaterra and I finished with 19 points. This season, we had a playoff game at Branson with a big crowd and a lot of emotion.”

Squiers also plays lacrosse at Redwood High. “I love being a part of both teams equally because the chemistry with both is off the charts. I’m lucky to be around such a great group of guys athletically.”

Growing up, there was a rule of participation in the Squiers household: “every sport you played, you also had to do something in the arts. I started with dance but I loved the sound of the guitar and songwriting.” That resulted in the publishing of his album.

“My Mom’s side is where I get the arts.” It’s basketball from his father’s side. But it’s all creativity.