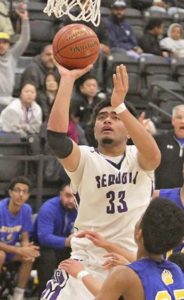 Lauese, a 6-6 forward from Redwood City, CA, comes to CPP after a successful high school career at Sequoia HS where he led his team to a Peninsula Athletic League South Championship and a 22-8 overall record in his Senior season.

He was named the MVP of the Peninsula Athletic League after averaging 15.3 points, 10.1 rebounds, 1.9 assists, and 1.1 blocks per game in his final year.

From the Coach: “We are looking forward to Ziggy joining our program. He will bring size, skill, and versatility to our team. His strong work ethic both on the court and in the classroom will represent our program well in the coming years.”

Chabot Gladiator Basketball: “We are excited to announce the 2018-2019 commitment of PG Isiah Jennings of Envision Academy out of Hayward, Ca! Isiah averaged 16ppg here are some highlights of Isiah in action: LINK

Very quick PG who can attack in open floor (looks like could also run track at next level). Has good handle and made some outside shots. Looks to pass first and make plays for teammates.”

At 6-foot-1 and out of Archbishop Mitty, he redshirted this past season at AP after averaging 10.9 points alongside teams bests of 135 assists and 48 steals as a sophomore’