Beau Keeve to the Mount Rushmore State | Nor Cal Basketball 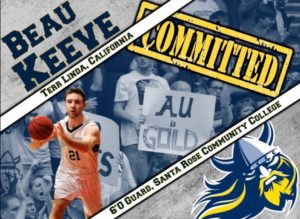 Beau Keeve of Santa Rosa Junior College (SRJC) had closer options to continue his education and college basketball experience than moving 1,750 miles away but his desire to see more of the United States and to join a successful program won out and now he is headed to Augustana College in Sioux Falls, South Dakota.

The 6-foot guard, formerly of Terra Linda High, averaged 11.2 points per game (second best on the Bear Cub squad) this past season while shooting 46%, 39% and 64% respectively alongside producing 3.8 rebounds and 3.8 assists a contest. He posted a 2.6 assist-to-turnover ratio, nabbed 2.1 steals an outing and earned All Big Eight Conference honors.

So what will he be bringing to his new program? “I’m an veteran point guard who is experienced with two different college systems (he played both football and basketball as a freshman at Chapman University in southern California) and I’ll be bringing that to a young team. I see myself as a threat from the outside and a strong ballhandler who can find guys for shots. On defense, I picked up the opposing team’s best player this season.”

On his three-day trip to Sioux Falls, “I was pleasantly surprised. I had never heard of Augustana before they started recruiting me and I thought it would be a desolate place but Sioux Falls is the biggest city in South Dakota.” Close to 185,000 residents make up the city with 250,000 living in the metropolitan area. The Sioux Falls Skyforce is a member of the NBA G League.

“The school, the people and the businesses in town are really well-connected and Augustana has great fans,” Keeve said. Coach Tom Billeter’s team averaged just under 2,500 fans this past season, third best nationally among DII schools. “It’s also a very sound, decorated program” seeing that the Vikings won the 2016 DII NCAA national championship. 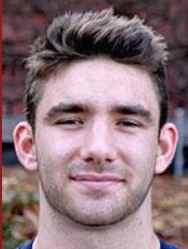 Impressed by what he saw and experienced, Keeve made the call on the final day of his visit. “I wanted to get out of California and experience something different.” He is heading to a program that graduated its second leading scorer and top assists producer.

There is a connection in play here. “I was on the staff at Arizona when Craig McMillan, Santa Rosa’s head coach, played for the Wildcats,” said Billeter. “We have remained friends throughout the years and he highly recommended Beau. He knew we were looking for a tough defender and said Beau was one of his best he has had.”

Besides his recent signing, Keeve’s recited three other best basketball moments. “Growing up playing youth basketball, I played on a really good AAU travel team. In sixth and seventh grade, we would get together before school and play for an hour. I really cherish those moments.” He added, “the first time I dunked during the summer going into my senior year in high school” and “going 25-5 with SRJC and reaching the Elite Eight in Ventura last season. We lost to Yuba starting out, went 4-4 but then turned it around and won 21 games in a row. Everyone played to their full potential and we got the best from each other. Choosing Santa Rosa was a great fit.”

“It’s been a long journey to get where I am,” Keeve offered. His hoops odyssey is not yet over.