Raymond will join the Findlay Family from East Oakland for his senior season. Let’s get it!” 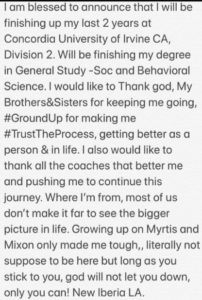 “…Cole, in his one season at Central Wyoming, helped the Rustlers to a 20-win season while competing in the difficult Region 9. Cole also spent one season as an assistant coach and recruiting coordinator at Division II Fresno Pacific (Calif.) and five seasons at Sierra (Calif.) College, a two-year school where he was promoted to associate head coach in 2015. The Wolverines reached the playoffs each year during Cole’s tenure.

During his playing career at Ashford (Iowa) University, Cole was named an NAIA Division II Academic All-American. Previously, he was an all-conference player at Sierra and then spent one season at Dakota State (S.D.)…”

Players from northern California on the 2018-19 Metro State roster:

Keshad Johnson: “Blessed to receive an offer from the University of Cincinnati. Go Bearcats”

The 6-foot-3 Capital Christian High guard is a 2018 graduate.

Dominican men’s basketball and Coach Booker T. Harris are excited to announce the Inaugural Dominican Basketball Coaching Clinic Sept. 15 from 12-5 p.m. PDT at the Conlan Center on the campus of Dominican University of California.

Golden State Warriors assistant coach Ron Adams will headline the event as the keynote speaker. Adams completed his fourth year as an assistant on Steve Kerr’s staff, helping the Warriors capture their third NBA Championship in four years. Coach Adams has been an assistant and head coach for over 40 years. His resume includes stops in the collegiate ranks at Fresno Pacific, UC Santa Barbara, Fresno State, UNLV and Drake. While in the NBA, Adams has worked for the San Antonio Spurs, Philadelphia 76ers, Milwaukee Bucks, Chicago Bulls, Oklahoma City Thunder and Boston Celtics before his current stop in the Bay Area.

“We are excited to have Coach Adams be the keynote speaker at our coaching clinic,” Dominican head coach Booker T. Harris said. “His success with the Warriors the last four years, combined with the various coaching experiences he has had over the span of his career, makes him a great resource for coaches to learn from.”

The entire series of speakers will be announced in the upcoming weeks. Cost of admission will be $50 for an individual coach or $40 per coach for more than one member of a coaching staff. You can register at http://dominicanathletics.com/coachingclinic at your convenience. Check-in and on-site registration for the clinic will take place starting at 11 a.m. on Sept. 15 at the Conlan Center located at 1475 Grand Ave., San Rafael, CA 94901.

The ninth annual Nor Cal Clash will be held Sunday August 26th at Chabot College in Hayward at 3:00 pm. This one-game event will have elite players from Northern California in the class of 2019 playing against elite players in the class of 2020.
The purpose of the event is to help promote Nor Cal basketball and its’ elite prospects. A report on the event will be done by the Hoop Review scouting service in addition to websites norcalpreps.com, californiapreps.com, prephoops.com and other media outlets.
Coaching in the event will be Joey Rollings of Sheldon High in Sacramento, the 2018 state Open Division runner-up, and Tom Costello of Dublin High, Nor Cal Division I regional quarter finalist in 2018.
Team practices will be Saturday August 25 at Las Positas College in Livermore. The juniors (2020) will practice from 1:30-3:00 pm and the seniors (2019) will practice from 3:00-4:30 pm. Players will be made available for interviews after their practice session is over.