“This year’s Most Outstanding Player: JoVon McClanahan of Salesian”

“Justin (Buchanan High) Everett provided two team-leading performances to help Humboldt State to a pair of victories as he claimed CCAA Player of the Week for Dec. 3-9.

The redshirt senior from Clovis posted averages of 24.5 points, 5.5 rebounds and 2.5 steals in wins over Cal State Monterey Bay and Stanislaus State. Everett scored a team-high 21 points to go with seven rebounds in Thursday’s victorious effort over the Otters. Saturday, he poured in 28 points as the Lumberjacks fended off a charging Stanislaus State for 87-78 win. Everett connected on a combined 58.8 percent of his shots on the weekend.

With 72 field goals made thus far on the year, Everett ranks 24th in NCAA Division II. He currently stands in third in the CCAA in field goal percentage (56.3) and fourth in points per game (16.0).”

Temidayo Yussef just missed a double-double with a solid 14 points and nine rebounds but his Long Beach 49ers fell to Pacific 74-68.

On Sunday, Gabbard scored 16 points alongside eight boards as the Slugs fell 73-58 to Claremont-Mudd-Scripps. 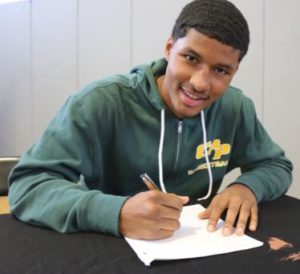 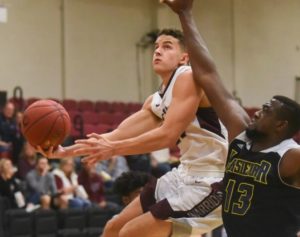 Jordan (Enterprise High/Shasta College) Spaschak is the leader in assists for Westmont College so far this season with 41 as well as averaging 5.1 points and 5.2 rebounds while shooting 46%, 40% and 62%. He has started all nine games, playing 24.0 minutes a contest.