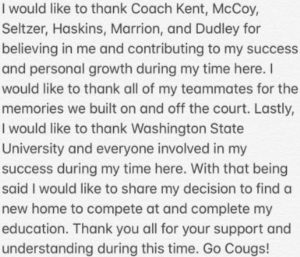 He redshirted in Pullman as a freshman so it looks like he’ll lose a season of eligibility while sidelined this time but hopefully he’ll get back on the court in mid-year 2019. Might somewhere in the Big West or Mountain West be a better fit?

Cañada wins in an back and forth overtime slugfest against a tough Santa Rosa team.”

Eric Boose finished with 23 points (on 25 shots though) and an amazing 20 boards (10 apiece on both ends in Butte College’s 62-55 triumph versus Merced College. Butte box

Ethan Kassel: “No, they haven’t played quite the schedule that University or Stuart Hall have, but with a 56-49 win over Vista Murrieta, Lick-Wilmerding is 9-1. Junior guard Allen Wilson can do everything and a healthy Zach Johnson in the post is a force to be reckoned with.”

Coaching Changes: “No one is talking about this, but if not for a 4 point loss to Buffalo, Kyle Smith and USF would be undefeated and possibly ranked in the Top 25

Has this happened since Bill Cartwright played there?

If I’m an AD at a big school where it’s hard to win, Kyle is on my short list.”

This was a great promotional idea and San Francisco jumped right on it:

When an opportunity literally falls into your lap…

In 11 games/starts and in 19.5 minutes a contest for Boston University, 6-foot-3 freshman guard Garrett (Clayton Valley Charter) Pascoe is averaging 2.1 points an outing but is second on the team with nine steals and third with 24 assists. He has a 24/11 assist-to-turnover totals.

Chaminade Men’s Basketball: “For four years Masa Swain has displayed what it means to be a great teammate, has bought in for the greater good of the program and has worked his tail off for his brothers.

On this day we are excited to announce he has been rewarded with a full scholarship. Congrats Masa!”

A redshirt junior, the 6-foot-3 Swain is out of Bellarmine Prep. His bio and stats.