Eddie (Archbishop Riordan/CCSF) Stansberry scored 26 points in powering Hawaii to a 71-63 victory over Alabama A&M. He shot 6-12 from long distance.

Pomona-Pitzer won the battle of the hyphens 90-78 against Hardin-Simmons.

UC Santa Cruz fell to Whittier College 88-74 despite Sam (Vacaville High) Gabbard posting a 26 point, 16 board double-double for the Slugs. 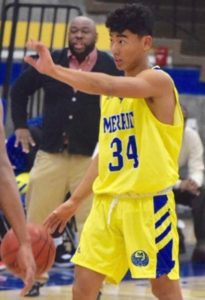 Derrick Jones: “Shout out to my (Merritt College) PG Sherab Nyima for a 4.0gpa this semester. Also shooting 50% from 3, 48% from the field with almost a 2:1 ATO….just a freshmen! 4year coaches may want to take note

But then came a first loss to Menlo-Atherton.

St. Mary’s Hoops: “Point Guard Jordan Ford is currently the only player in the WCCsports West Coast Conference shooting better than 50% from the field, 40% from the three