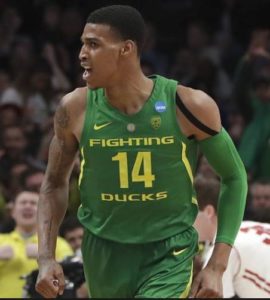 Oregon sophomore Kenny (Manteca High) Wooten is a purveyor of the spectacular. His extraordinary athleticism allows him to jam lob passes, grab an offensive rebound and dunk in the same motion and block shots most bigs cannot reach.

Listed at 6-foot-9 and 235 pounds (the latter figure seems inflated), he averaged 6.3 points and 4.8 boards in 24 minutes a game during the 2018-19 regular season with a team high 74 blocked shots in 34 contests. Wooten attempted but one long distance shot and shot 43-64 at the foul line. He suffered a broken jaw in December and returned wearing a safety mask in January. As a freshman in the 2017-18 season, Wooten also attempted but one three-pointer and went 38-64 on free throws in 20 minutes a contest.

In the PAC-12 tournament with 7-foot-2 teammate Bol Bol out due to injury (since late December), Wooten scored 4.5 points while grabbing 5.5 rebounds during four games and in 21 minutes per contest. He shot 9-13 overall and 0-2 at the foul line.

In Big Dance action again minus Bol, he provided 7.3 points and 6.3 boards with 12 blocked shots in three outings and played 35 minutes each contest. Wooten shot 10-14 overall and 2-4 on free throws.

Ball Skills: Wooten lacks offensive playmaking ability (passing plus the ability to maneuver for his own shot) and neither element currently shows signs of improvement.

All three of these elements above are important for players of Wooten’s size in today’s NBA.

Looking into the future

With two years of college ball remaining, Wooten plus is his ability to defend away from the basket plus the knack for blocking shot attempts not directly in front of him. He needs rebounding consistency in order to have a greater effect on a game’s outcome. A summer of intensive effort focused on ballhandling and face-the-basket shooting is required to broaden his offensive threat.

If not much changes in two years, he’ll be an off-the-bench NBA role player at best which is an accomplishment but Wooten has the capacity to be so much more. 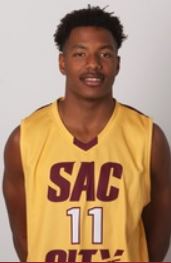 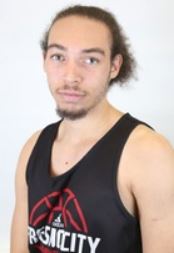 Mitchell is a 6-foot-3 point out of Florida.

Hoop Dirt: “I have heard from multiple sources that George Puou is no longer the head men’s basketball coach at DII Notre Dame de Namur University (CA). Word on the street is that he has moved to the women’s side and will take over as the Argonauts WBB coach.

Puou just finished his 12th season as the head coach at Notre Dame. His team finished this past year with a 2-26 record (2-10 PacWest).”

“Steph Curry’s quiet leadership on full display this season: “He was tapped into the situation from the beginning”  No shade, no personal agendas — other than winning. Warriors’ star Curry and the art of leadership.” Duby Dub Dubbs