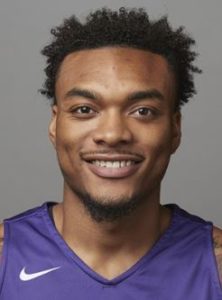 Carlos Johnson is not necessarily remembered by many prep basketball fans in the Bay Area because he spent but one season here as a junior at El Cerrito High. As a Gaucho, he averaged 15.9 points plus 8.3 boards.

Johnson formally committed to UNLV but rescinded that agreement when a coaching change occurred and he eventually headed north to play for Coach Lorenzo Romar and the University of Washington. After averaging a solid 5.9 points and 3.0 rebounds as a freshman, Johnson experienced Romar being let go in favor of Mike Hopkins. Playing time became scarce in Johnson’s sophomore season (16 minutes in Washington’s last 18 games) and he transferred to Grand Canyon University in Phoenix, a member of the Western Athletic Conference (WAC).

In 34 games/16 starts this season (he received a waiver to play right away), Johnson averaged 24 minutes and a team-best 14.3 points as well as 4.1 rebounds. He also provided a second-on-the-team 32 steals. Johnson finished shooting 49% overall, 33% from long distance and 78% at the foul line, earning a solid 155 attempts at the charity stripe.

He started the season strong, fell off and then tallied double figures in three straight mid-season games: 21, 26 and 20 points respectively versus UMKC, Cal Baptist and CSU Bakersfield. Again he cooled off before scoring in double figures in eight of his last 10 games. The latter streak was highlighted by 25 points versus Eastern New Mexico, 22 and then 31 in back-to-back matchups with Seattle and 35 markers in a pairing with Utah Valley.

But he closed out with nine points in 27 minutes versus New Mexico State in an 89-57 WAC tournament title game loss and then scored just two points in 14 minutes (he fouled out) against host West Virginia in a 77-63 College Basketball Invitational opener.

Analysis: The PAC-12 was not a good initial hoops home for Johnson. At 6-foot-3 and 215 pounds, he is more a banger than a sharpshooter and matching up against the high caliber of PAC-12 athletes was not in his favor. The level of the WAC is a much better setting for Johnson’s frame and primary skill set and his move to a lower level league proved to be fruitful. He has one more season of eligibility and his next step needs to be showing overall consistency in his production, especially against higher level WAC and non-WAC opponents.

Will the Golden Bears win a game next season? It will be Paris Austin and who else taking the floor.