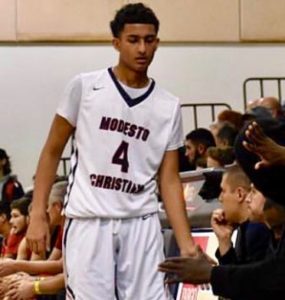 A senior at Modesto Christian High, Sahi was almost pre-ordained to attend the Turlock-based California State University. “Since I was a freshman, they (the Warriors coaching staff) always showed me love. My cousins go there, I know the campus and it’s close to home.” He took an official visit on July 25.

The initial link began with Assistant Coach Jordan Santa Maria, a 2014 Encinal High graduate who went on to play at and graduate from Stanislaus. “I bonded with him,” Sahi explained. Then came developing a rapport with Head Coach Paul Trevor.

Asked what the Warriors coaching staff liked in him, Sahi said, “how hardworking I am. I stay in the gym and grind. I also trusted the (development) process being a four-year varsity player who waited his turn as a freshman and sophomore. I took a step back and learned from the seniors.” All that plus a shooting stroke second to none as Sahi holds the Modesto Christian school record with 10 made treys in one game. He buried six in one quarter. 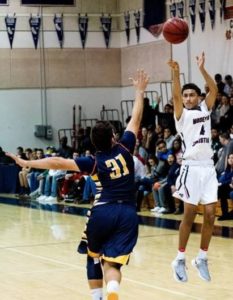 It’s Sahi’s turn to lead. He ran this summer with the Youth Basketball Academy (YBA) coached by Brandon Cole. “He told me ‘this is your team’ and I played as a point guard and floor general. I want to translate that into my senior year.” Cole wrote upon hearing of Sahi’s committment, “One of the best human beings I’ve ever gotten to coach. A true leader on and off the court!”

Also attractive is Sahi’s academic prowess. “As a junior, I posted a 4.3 grade point average, with three AP classes.”

He’s looking to eventually enter the legal field as “my family are all lawyers and doctors and I like the real estate business and contracts.”

But first comes his final season at Modesto Christian. Under Coach Brice Fantasia (who has known Sahi since the fourth grade), the Crusaders are coming off a 26-9 overall, 11-1 Tri-City Athletic League run and another strong season is expected. “We look good and have a lot of size, shooters and defense,” Sahi said. He averaged 8.8 points per game in 2017-18 while shooting 45% overall, 45% from three-point range and 80% at the foul line.

Asked about the pressure that can come with being a member of an annual hoops juggernaut, Sahi offered, “It’s a privilege to have MC on my chest. We’re prepared, not scared.”