“‘He was Reggie Miller with a handle’: Thirty years ago, the NBA lost Ricky Berry
Friends and teammates reflect on the day the Kings guard committed suicide” Marc J. Spears

The 6-foot-10, 235 Martinez is originally out of Vanden High. His current status and UNLV’s Mountain West Conference membership are an excellent pairing.

Brandon Cole: “I’d like to announce the hiring of Don Manning Groundup_D to CPAOBasketball as the Associate Head Coach. Don has years of prep & grassroots experience that will be an asset to our program. He will be able to continue to help the Sacramento basketball scene & help change lives!”

He’s a 6-0 guard out of Valley Christian, Analy High and Team Arsenal.

Nunnally is out of Weston Ranch High and UC Santa Barbara.

Allen prepped at Palma High and then played at UCLA followed by Hawaii.

“Blackwell fiercely enhancing game
Fresno State rising fifth-year senior point guard Noah Blackwell has been hard at work this offseason on all aspects of his game in preparation for the 2019-20 season.” 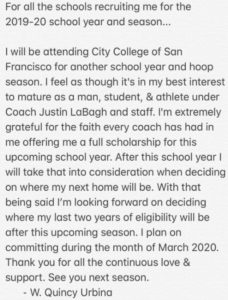 Marquese Chriss, out of Pleasant Grove High, is listed as one of the five.

Xavier Thames has been inducted into the San Diego State class of 2019 Hall of Fame.

He’s out of Pleasant Grove High.

An important article for all of us.

“The NCAA doesn’t have a Rich Paul problem. It has a problem with black men.
The move to regulate agents looks like yet another effort to police black mobility and freedom” Justin Tinsley

“How elite high schoolers are skipping college to get to the NBA
Today’s top high school basketball players are taking alternative routes to the NBA that don’t involve college.” Rickey O’Donnell