Is SJSU's season and recruiting class do-or-die? | Nor Cal Basketball

SJSU posted 4-26 overall, 1-17 Mountain West Conference records followed by 4-27, 1-17 in the initial two seasons under former Colorado assistant Jean Prioleau, who signed a five-year contract when hired in August 2017. His pair of recruiting classes were not rated highly and such evaluations played out accordingly. Prioleau needs a successful season three (qualified as finishing ‘around’ .500 overall and in league) not only to retain his job but in order for the program to be attractive enough to lure a more promising batch of Spartan recruits than populated his earlier efforts.

Verbal Commits has SJSU with three available 2020 scholarships — 6-foot-2 guard Brae Ivy, 6-foot-5 guard Isaiah Nichols and 6-foot-8 forward Craig Lecesne will have completed their eligibility in 2020 — but that number is subject to change if any current players decide to transfer, an element endemic to SJSU hoops.

Below is a positional list of the 2020 recruiting prospects associated with SJSU according to Verbal Commits and other media, plus pertinent information:

Of the talents on the above list, Ezewiro is the sole prospect with the potential to help right away but he’s a high major talent and won’t be coming to Silicon Valley. The remaining frontcourt targets — Osifo and Clarkin — appear to be weak targets for a Mountain West Conference program with a coach entering a critical third season. Each of the other talents in SJSU’s 2020 recruiting class appear to be in the long-winded category of ‘they have the potential to help but it’s anyone’s guess when they will be ready to consistently contribute.’ 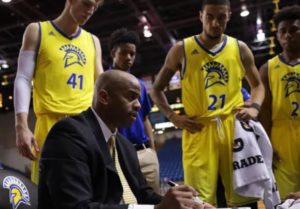 A factor not in Prioleau’s favor is the recruiting reality of his tenure. Players are hesitant to sign early if there are indicators that the coach they expect to play for may not be in that position come September (Mendoza obviously being an exception). However, if he suffers through another dismal season yet can point to some plus recruits having signed on in November then Prioleau may be able to retain his job.

The next three months are as crucial as how the upcoming Spartan season plays out.

As for recruiting success in the home base of northern California, 6-foot-3 Zach (Capital Christian High) Chappell is back for his sophomore season and a consistently solid contribution is desperately needed from him in order for the Spartans to have a chance to be successful. In 15 starts (29 games, he averaged 5.3 points and 2.2 assists alongside 20 steals. Look for him to be a season-long starter.

6-foot-10 Michael Steadman, out of James Logan High and City College of San Francisco, transferred to Montana in the off season after leading the team in scoring (13.2) and rebounding (8.5).