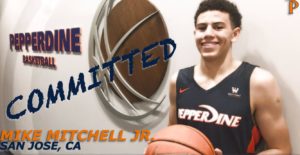 It isn’t the norm for a prospect to commit to a school and coach (heavy emphasis on the latter in this case) while still a junior. However, 2021 6-foot-2 Archbishop Mitty guard Mike Mitchell performed his due diligence, received unanimous ‘thumbs-up’ feedback from those in the know and then made the call recently to attend Pepperdine University and play for Coach Lorenzo Romar.

“I felt most at home when I visited there,” Mitchell recalled. “I loved Lorenzo Romar and the way he talks. He is a real genuine dude who develops point guards. I learned what I could do in their system and how my skills fit. Pepperdine plays a very uptempo, guard-oriented offense with a lot of on-ball screens.”

Among other research, Mitchell reached out to others for input: “I asked other guys who played college basketball and they told me Coach Romar was the most genuine coach.”

Mitchell added, “I talked this over with my family for a long time. I felt I had enough schools recruiting me and decided Pepperdine was the best fit.” Now he’s working on recruiting others to join him at Pepperdine.

The origin of the relationship began with conversations. “Coach Romar began talking a little to me and saw me play in the EYBL (the Nike Elite Youth Basketball League). I blew up when I played in the Section 7 camp in Arizona (in June).” Soon Pepperdine, USC, UC Davis, UC Santa Barbara and San Diego State became official suitors. USF (Coach Kyle Smith) actually offered when Mitchell was a freshman. But on August 3, Mitchell announced for Romar and the Waves. 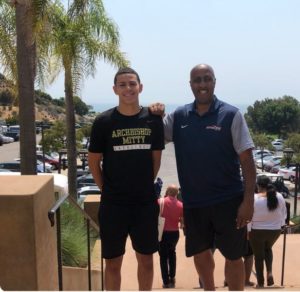 He’ll play the point for the Pepperdine. One factor in Mitchell’s decision is that a large number of backcourters entered the University of Washington program (where Romar previously coached) — Isaiah Thomas, Brandon Roy, Nate Robinson, Dejounte Murray, Tony Wroten, Terrence Ross, Andrew Andrews, Nigel Williams-Goss, C.J. Wilcox, Markelle Fultz, Abdul Gaddy, Scott Suggs and others — and went on to either play professionally in the National Basketball Association or abroad.

Additionally, the name Colbey Ross may not be a national one yet but he is the latest Romar protege. The 6-foot-1 junior averaged 19.4 points plus 7 assists (239 total) and 41 steals last season and is on his way towards becoming Pepperdine’s all-time leader in scoring and assists before his eligibility is completed. He earned 2018-19 All-WCC Men’s Basketball First Team honors but will have completed his eligibility by the time Mitchell appears on campus.

What does Mitchell see as his best skills? “My speed, my shot and creating for others.” Regarding leadership, “I’m quiet off the court but always talking with my teammates on the court” as a point needs to be.

Pepperdine is a member of the West Coast Conference and situated next to the Pacific Ocean in Malibu. Mitchell will be a business major.

But first comes two more seasons at Archbishop Mitty. Named a co-captain when just a sophomore, he and the Monarchs are the returning West Catholic Athletic Conference (WCAL) regular season champions on the basis of a 56-55 road win last February over Serra High. “We weren’t the pre-season favorite but we have a real tight bond and we’re scrappy.” WCAL Most Valuable Player Devan Sapp departed for an out-of-state school but 6-foot-6 Nigel Burris has transferred in from Stuart Hall plus 6-foot-2 guard Marcus Greene, a First Team All-WCAL selection, returns alongside Mitchell.