Below is the Fresno City College men’s basketball Fall roster: the Rams always seem to annually make their way into the state Final Four.

In this Three Man Weave list of the Top 100 college players, two from northern California make the cut:

“26. Jordan Ford, G
Perhaps the best-kept secret in college basketball, only those around Moraga, California, knew Ford had the chops to be a one-man-wrecking-crew. It’s quite simple really: contain this slippery assassin, and you have a chance. Don’t, and watch your heartbeat slowly flatline over the course of 40 minutes.”

“50. James Akinjo, PG
The ‘1A’ of Georgetown’s dynamic guard duo, Akinjo paces Patrick Ewing’s fast-break frenzy. ‘Efficiency’ is the key to his improvement, particularly as a finisher at the rim and in the mid-range.”

Joe Davidson: “Capital Christian administrators informed the boys basketball team that it has relieved varsity coach McCall Wollman. Cougars have been a regional power in recent years with multiple trips to the CIFState NorCal Open playoffs.”

Definition of an exhibit 10 contract. 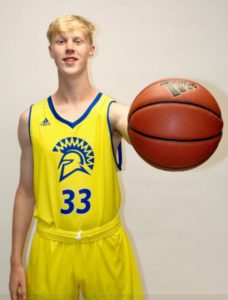 “Al Attles reflects on his illustrious career ahead of Hall of Fame induction” Marc J. Spears

Spears can always be counted on to increase a reader’s knowledge about sports and its variety of participants. He is the most interesting sports read today (and yes, Dos Equis should hire him for their next commercial.)

Boston College, George Mason and Arkansas Little Rock.He’s 6-foot-9, 230 and out of Sweden with other offers from

Allan Brown: “Extremely exited to announce! 6’2 G Martis Johnson (Tis13_ ) has picked up his first offer from CoachWaterman and Dj_broome3 at the Academy Of the Arts University in San Francisco CA ARTUMBB this is the first of many for Martis as he enters his SO year LCCRedDevils”

College of the Sequoias: “COSMBB would like to welcome another local product to the Giants family! 6’7” athlete Tiveon Stroud (Selma HS – Selma, CA) will bring added length and versatility to the COS program for the next two years. Great addition!”