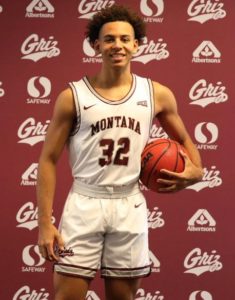 The development of the Keystone Oil Pipeline coming out of Canada and down through the heartland of America, including the state of Montana, has provoked all sorts of controversy and contention. In contrast, Montana Head Coach Travis DeCuire and Associate Head Coach Chris Cobb have quietly created their own conduit in just five short years, this a basketball one connecting the Bay Area to Missoula in the Big Sky State.

The result? No disagreement or protesting, just a bountiful signing harvest and winning hoops buoyed by such talents as Sayeed Pridgett, Timmy Falls, Michael Steadman, Naseem Gaskin, Hunter Clarke and the latest, Robby Beasley, choosing to head north and east.

The Attractions for the 2020 Beasley

They were multiple propelling his commitment according to the 6-foot-2 Beasley, “I liked the campus, the guys, the coaching staff and the community and I could see myself there for four years. I wanted to play D1, be part of a winning culture and participate in March Madness. Montana offered all that–my plan is to come in and help them win.” The Griz are 109-58 overall, 71-22 in Big Sky Conference action during DeCuire’s five -year tenure producing a pair of Big Dance appearances (the last two seasons) plus entry in the NIT and CBI tournaments alongside participating four times in the Big Sky tournament championship game.

The genesis of Beasley’s connection to Montana began early. “I have a three-year relationship with Coach Cobb, my main recruiter, beginning with us talking during an open gym. We spoke about what they were seeing then and what development they expected.” Thus began what proved to be a mutually fruitful kinship.

Other factors working in favor of the Griz included Beasley’s familiarity with some of the existing Montana players. Beasley and Falls won an East Bay Athletic League championship together at Dublin High back in 2016-17 and, while never matching up with Naseem Gaskin when the latter was at Bishop O’Dowd, the two are familiar with each other. Alluding to both high school and travel team play, Beasley explained, “I’ve played with or against a lot of the guys, even some from southern California.” He also is a former AAU teammate of fellow commit Hunter Clarke. 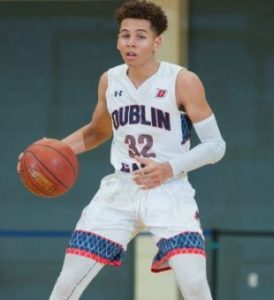 Plus with four of the Montana coaching staff having Bay Area ties (DeCuire as associate head coach at California, Cobb as assistant coach at Chico State and San Francisco State as well as playing at Menlo College and Bishop O’Dowd, Jay Flores both assisting and playing at Chico State, playing at Sonoma State and prepping at Jesuit High, and Zach Payne playing at both Diablo Valley College and De La Salle), the quartet is more than familiar with Bay Area culture and the differences any of their recruits may experience upon entry to the Big Sky State.

What’s Next for Beasley

Beasley will initially be a point. “They (McCuire and his staff) like versatile players so I’ll primarily play the one as a freshman but also play off the ball and come off screens as a two.” He took an official visit earlier in this month. Looking to major in business and entrepreneurship, he met with “my academic advisor and other people on the college side. It was very helpful.”

But first comes Beasley’s senior season at his new school, Dougherty Valley High (DVH) in San Ramon. A First Team All-Bay Area News Group honoree as a Dublin High junior, he averaged 17.3 points, 4.7 boards and 2.8 assists. The team finished 25-6, 12-1 but a recent family move took him into a different school district. “We will definitely be competitive with a lot of guards and three-point shooters,” Beasley offered. “We’ll get up-and-down the court and press because we’ll be a bit low on size.” He’ll be joined by his brother, already heralded 2023 prospect Ryan Beasley. DVH concluded last season 19-9, 7-6.