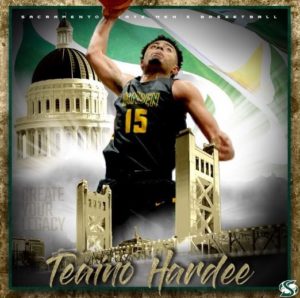 When Vanden High’s Teiano Hardee returned home from his official visit to Sacramento State in the first week of October, he called Coach Brian Katz and the Hornet staff a day later to let them know of his commitment and then waited another 24 hours to post his decision on social media. The public announcement coincided with his birthday, allowing Hardee to bestow a hard-earned gift, a D1 scholarship, on himself.

But the Hornets are also receiving quite the dividend as the Vanden High Varsity Offensive Player of the Year averaged 22 points and eight boards a game, alongside 78 treys. Hardee posted a pair of 40 plus points games (43 points soon followed by 42 points) as well as four 30 plus points contests.

The reasons for his choice are multiple. “They (Sacramento State) showed me the most love and I had the most communication with them” Hardee explained. Assistant Coach Chris Walker made the initial outreach to Hardee and Katz and Company were prolific in their evaluating: “they came to games and practices and watched a lot of my film. They liked my versatility.”

“I also committed to Sacramento State because I wanted to be a part of the brotherhood the players showed and the coaches preached and I want to be the first to lead them to a NCAA tournament appearance and make a run to win it. Just being on the team that was the first to ever do it while making a name for Sacramento State and myself as well are my goals.”

Additionally, location was a favorable factor for the Hornets. “My family and friends can come and see me play,” Hardee said.

On the first day of his official trip to the state capital, the 6-foot-5 talent toured the campus, watched a hoops practice and then later spent time with some of the players in their dorms. Day two involved attendance at a volleyball game, then a football game (a 48-27 victory over Eastern Washington) plus “they broke down what they liked about my game and what they could offer. I felt no pressure.” Hardee left with an offer.

He’s unsure of a college major at this point but “if basketball doesn’t workout whether that is playing in the NBA or playing professionally overseas, then I’ll pursue a firefighting career after college.”

“I want to thank my Mom and Dad for all the sacrifices they made and my sister because I looked up to her growing up and she inspired me to play basketball.” Taimane Lesa-Hardee is a 5-foot-7 sophomore guard who averaged 9.3 points per game last season at San Francisco State. 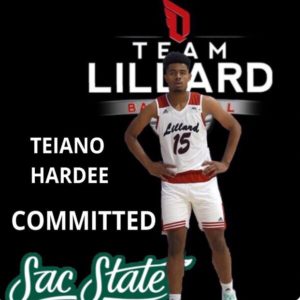 Hardee also expressed appreciation to “(Vanden High) Coach Micheal Holloway, my big brother Brandon Davis, Coach Jon McCall and (from Team Lillard) Coach Raymond (Young), Coach Phil (Taylor) and Coach TJ (Taylor) for giving me the opportunity to play for their program and developing me as a player physically and especially mentally, and Damian Lillard himself.”

Vanden finished 20-9 overall, 8-2 last season in Monticello Empire League play. As for the upcoming season, Hardee said, “we should be good this year. We have a lot of upside but we’re young with just two seniors.” As a captain and one of the four-year players, Hardee will be providing leadership to his neophyte teammates in addition to his prolific numbers.