Quincy Urbina calls it for Grand Canyon | Nor Cal Basketball 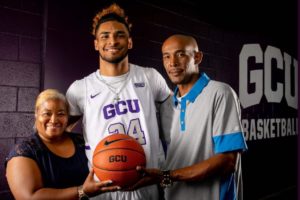 Originally out of Clovis West High, 6-foot-7 Quincy Urbina was poised to make his San Jose State University (SJSU) playing debut after a 2017-18 redshirt season, ready to be a factor in the turn-around of the lowly Spartan basketball program. However, a late summer coaching change occurred and, as a result, many on the SJSU roster scattered elsewhere. Urbina chose to attend City College of San Francisco (CCSF) and provided 10.7 points, 4.6 boards and 1.2 steals a game for the Rams who finished with a 31-2 record and fell by six points, 85-79, to Fullerton College in the 2019 state title match.

Back for his sophomore season in The City, Urbina recently decided on Grand Canyon University (GCU), a private Christian university in Phoenix, as his four-year college pick. He’ll be playing for 14-year NBA veteran Dan Majerle.

He’s moved from a cellar-dweller to a perennial state championship contender and next season will be taking the court for a program boasting of 27, 22 and 22 victories in the last three seasons.

In retrospect, call his decision-making wise. Urbina credits personal maturity. Because “out of high school, I was telling everyone I’d go to the NBA after my third year of college. I was immature when I was at San Jose State but I enjoyed my time there. I grew up after I departed.” An additional element: “Playing in the Drew League this summer, I saw how unprepared I was.”

The why of his call for the Antelopes centered around his recent official visit. “We (his step-mother, Dad and sister) would go to church all the time even though we (the younger kids) sometimes resisted.” While visiting the campus during the first weekend in October, Urbina found “a great atmosphere, different than anything I’ve ever experienced before. The students would leave their long boards and scooters outside the classrooms because it was a trustworthy environment. It was a great atmosphere where no one lies, cheats or steals. The students were very friendly, randomly coming up and talking to my parents and me. I felt everyone on campus would help me grow as a person.” 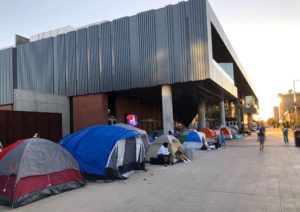 There was also the recent Friday Midnight Madness event where GCU students camped out since Tuesday in order to get a seat. Once inside, “the fans were going crazy.” The large Antelopes student section, nicknamed the Havocs, is widely known for the level of noise it generates. Season tickets are already sold out, this coming after a year where an average of 7,170 fans somehow squeezed into the 7,000-seat Grand Canyon campus arena.??

Speaking of the actions of the GCU coaching staff, “I felt they wanted me and they needed me.” Associate Head Coach Marvin Menzies, who formerly headed the programs at UNLV and also New Mexico State, was Urbina’s primary recruiter. “He was another big reason for me committing to Grand Canyon.” Antelope sophomore Gabe McGlothan was his player host.

On the first night of his visit, Urbina and his parents enjoyed a long dinner with the GCU coaches and support staff as well as three other visiting recruits and their parents. One was Chance McMillian out of Golden State Prep and Bethel High and he also recently committed to the Antelopes.

Day two involved a campus tour including seeing the athletic facilities, talking to the athletic counselors and trainers and the strength and conditioning coach. Dinner (for 50!) took place at Coach Majerle’s house, alongside hanging out and talking with the players at their apartments plus the aforementioned Midnight Madness.

Asked what he’ll be bringing to the GCU hoops program and campus, “I’ll bring improvement everyday and every game, working continuously and also becoming a better person. They (the coaching staff) talked to me about guarding the 1 through the 4. If a little guard is on me, I’ll go down in the post. If it’s a big, I’ll take them off the dribble and get a shot. I was raised to be a dog–I’m aggressive and won’t be bullied.”

CCSF Coach Justin Labagh added, “Quincy plays hard. He’s a complete competitor who knows how to play and is very skilled. He’s intellectual, real smart but can overthink things at times and he knows that. He’s a hell of a player.”

Urbina will be a criminal justice major with plans on becoming a lawyer. Later, he wants to enter politics. “I want to help people. I’m from LA and I know what it is to struggle.” Plus, “My Dad has drilled into me that basketball isn’t forever.”

As for CCSF this season, “we’re looking real good, two deep at every position and we love to compete. We’re a family and know each other so well. Not to be cocky, but the guys we practice against are our best competition.”

With a refreshing willingness to take honest and candid looks at himself, Urbina is perceptive, tenacious and appreciative. Each is a quality that serves him well on and off the court.