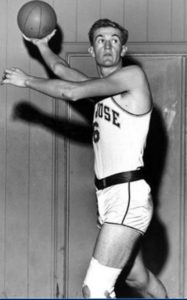 (Clark with his pre-Kareem version of the sky hook)

“George Clark, SJSU ’53, played for (Larry) Arnerich at San Jose High. But unlike Ray Silva, the tall and lanky Clark played on the varsity at SJH from 1945-1948. Clark, recruited by USC, briefly stayed on the Trojan campus but the pull from home was just too much.

By the fall of ’48, he was back in the Bay Area and on the San Jose hard courts. A member of the SJSU frosh team, Clark joined the varsity in January of 1950, playing for then coach Walt McPherson.

A favorite memory involves SJSU playing the then ranked #6 Bowling Green in a game at the Cow Palace. Clark was matched up against All-American Chuck Share, a 6’10″ center. Clark held Share to 10 points while scoring 13, leading the Spartans to victory over Bowling Green.

After his playing days, Clark went on to teach history and coach basketball at San Jose High from ’55-’59 followed by a vice-principalship at a Cupertino junior high. From then it was an administrative career of over 30 years that included a 12-year stint with the American International Schools. Clark, along with wife Bonnie, worked in Brazil, Peru, Mexico and Columbia before settling over the hill in Santa Cruz for their golden years.”