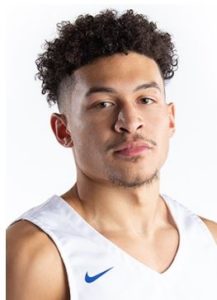 Kiree Hutchings, a three-time all league talent plus Central Coast Section Santa Cruz Coast Athletic League Junior of the Year while attending Santa Cruz High, is finally home. No, Hutchings isn’t back in the area of his prep hoops achievements but rather has found his fit with John Brown University (JBU) in northwest Arkansas. This after attending first Fresno Pacific University and then BIOLA University.

In 17 games, 13 minutes a contest, and four starts as a freshman at Fresno Pacific, Hutchings twice earned PacWest Freshmen of the Week honors as well as a selection as Defender of the Week before injuries curtailed his availability in the second half of the season. After a surprise head coaching change (Tim Kisner departed), Hutchings transferred to Biola University in southern California. However, getting time on the court was limited. 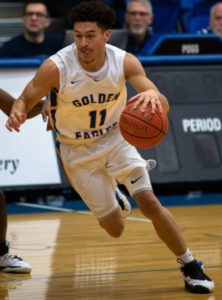 Back in January of 2019, Hutchings informed the BIOLA coaching staff that he would be seeking a new school. Having stayed in touch with Kisner, now an assistant at JBU, Hutchings asked about that program. He then flew to Arkansas, played in an open gym and participated in some drills. About two weeks after his visit, Hutchings committed to JBU.

Enjoying a smooth transition, the 5-foot-11 junior is currently averaging 21.4 minutes in 12 games while providing 8.3 points, 2.4 rebounds per contest alongside 27 assists and 14 steals. He is shooting 42%, 43% and 80% respectively and is already in possession of one Player of the Week honor.

“My role is to bring energy, a spark, off the bench,” Hutchings explained. “I play at the one and the two but I guard the other team’s point or whoever is bringing the ball up.” 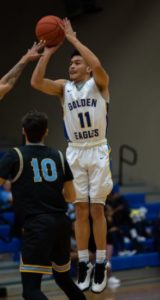 He continued, “this is a great group of guys to be around. I felt welcome right away which doesn’t always happen when you’re the new guy.”

The Golden Eagles currently sport an 11-1 record with Sooner Athletic Conference action to begin in earnest in January. Last season’s squad, led by two now graduated All-Americans, finished 23-11 and earned an at-large berth in the NAIA Men’s Basketball tourney. It’s still early but JBU has seemingly filled in any roster holes with newcomers like Hutchings and a repeat tournament entry, or more, seems within reach.

Hutchings is a Business Management major.