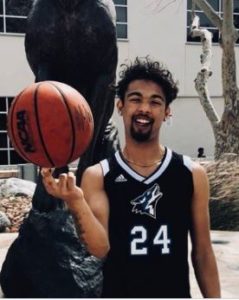 Kobe Ordonio: “Grateful and blessed to announce that my new home for the next 2 years will be Cal State San Bernardino…”

A career high 31 points as well as 15 rebounds courtesy of De’jon (Oakland Tech) Davis aided the Cal Baptist cause in an 88-87 overtime win over Seattle University.

Tyus (Fresno City College) Milhollin scorched the nets for 34 points in the Missouri Western 94-80 takedown of Washburn. He shot a remarkable 10-15 from three-point range.

In the loss, Kameron Malbrough brought 28 points to Alameda. box

Pomona-Pitzer was 10 points better than Redlands at 60-50 in the SCIAC semi-finals  as Micah (Lick-Wilmerding) Elan’s 17 points and six rebounds powered the Sagehens.

“…Menary graces the First Team for the second consecutive year after averaging 14.2 points per game, which is 10th in the conference. He shoots 44.3% from the field and 35.7% from beyond the arc, along with a 71.7% rating from the free-throw line. Defensively, he paces the team with 0.9 blocks per game and reels in 4.6 rebounds a game.

Menary’s strongest game of the season also came against Whittier with a 26-point performance. He shot 11-for-14 from the field and went 3-for-4 from the three-point line. He led the game with 12 rebounds and six assists…”

6-foot-7 freshman Keshad (San Leandro High) Johnson participated in 18 regular season games at just under six minutes a contest for San Diego State. He shot 35%, 22% and 38% respectively and scored 1.9 points plus grabbed 1.7 rebounds in his brief court time for the 28-1 Aztecs who still have the Mountain West Conference tournament and a berth in the Big Dance upcoming.

6-foot-11 freshman Joshua (Sheldon High) Morgan is averaging 8,2 points, 5.8 boards and 2.4 blocked shots in 26 minutes an outing thus far this season. He is shooting 62% overall plus 57% at the charity stripe.