Seth Greenberg: “Few thoughts Rick Pitino will kill it at @IonaGaelsMBB ; second if Randy Bennett goes to @GCU_MBB you need to understand his parents live in Phoenix.”

This sounds extremely iffy as not many coaches choose to drop down in conferences. However, the Western Athletic Conference is winnable for GCU (despite New Mexico State’s run) whereas Gonzaga owns the West Coast Conference. Plus, the 2020-21 season for the Gaels will be minus Jordan Ford with no heir apparent(s) on board. 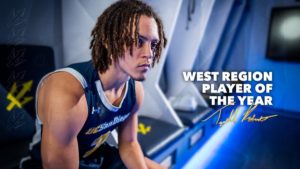 No surprise on this one, went too high after originally being a Buffalo commit (the Buffalo coach then landed the Alabama position). Hawkins played in six of 31 games for 5.2 minutes total so maybe he can regain this season of eligibility:

“Making A Name For Myself” Raymond Hawkins  An excellent self-feature.

It looks like he redshirted this season at HP.

From Chris Murray on SJSU’s various rankings within the Mountain West Conference:

In short: This program has been a disaster, and some might argue (I do it all the time) San Jose State doesn’t belong in the MW. The Spartans’ budget is ridiculously low ($1.3 million behind the second-lowest program in the conference) and its coaching pay is minuscule. The Spartans have averaged 8.8 wins per season this century and has just one winning season since 1995. That was a 17-16 campaign in 2010-11, which for many schools in the conference would be deemed a bad season. This is the best the Spartans have done in 25 years. The facilities aren’t good, the community support is non-existent and there’s only one NCAA Tournament appearance since 1980. God bless anybody who takes this job, which is about as dead-end as it gets. It would have been interesting if SJSU had returned Eric Musselman’s phone call when he was looking for a job before Nevada hired him. Could he have saved SJSU?”

7-foot sophomore Jack (Serra High/Oregon State) Wilson played in 18 games/15.4 minutes after becoming eligible in mid-season for Idaho, He averaged 4.2 points plus 3.2 rebounds while shooting 38% overall and 65% from the foul line.

6-foot-6 redshirt junior Lance (St. Mary’s High/Irvine Valley College/Fullerton College) Coleman II enjoyed participation in 28 games/six starts and 21.8 minutes for Cal State Northridge while averaging 7.4 points and 2.8 boards. He shot 40% overall, 34% from long distance and 10-13 at the foul line. 118 of his 194 shots taken total came from beyond the arc.

A Tyrell (El Cerrito High/Merritt College) Alcorn update: “For the GCAC tournament, the senior Alcorn averaged 19 points per game for Dillard University and led all players with 10 made threes while shooting 58.3 percent from the field. His 14 made shots ranked him third among all competitors.

Last week, Alcorn was also selected by the GCAC as a Second Team All-Conference selection and was named to the NAIA’s Men’s Basketball All-Star Team.