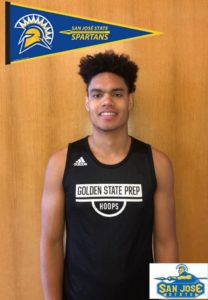 Golden State PrepBball: “Congrats to our guy Chase Courtney @chasecourt40 on his commitment to @SanJoseStateMBB”

Originally out of Arizona, he’s 6-foot-10, 215 and spent this season at Golden State Prep in Napa.

What happened to 6-foot-5 Torey James of Cape Fear Community College who committed to the Spartans on March 10?

They join Teiano Hardee and David Jones, both from northern California, who signed earlier. Plus, Christian Terrell will be back on the court for his senior season.

Landis Spivey has made it official with Cal State Fullerton:

…Spivey joins the Titans from Columbia Community College where he spent the last two years. He is a native of Stockton, California and ranked fifth in the CCCAA in made three-point field goals (94) during the 2019-20 season. He led Columbia College to a 2nd Place finish in the CCCAA’s Central Valley division last season while averaging 17.1 points and 5.4 rebounds while making 3.1 treys per game.

“Landis is a high character young man that has great length, high energy and immediately impacts us with his ability to shoot with range,” (Coach Dedrique) Taylor said. “He has a very high basketball IQ with his mom being a highly decorated head women’s coach. Anxious to have his experience on the floor as well as his ability for us to add depth.” 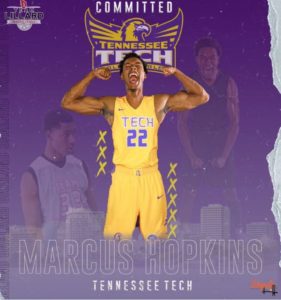 Team Lillard B-ball: “Congrats to Alum Marcus Hopkins on his commitment to Tennessee Tech! All your hard work on & off the court has paid off. STAY HUNGRY/STAY WORKING!!”

UMary Men’s Basketball: “We are proud to announce the signing of  @kameron_warrens out of Yuba Community College!

Out of Antelope High, Warrens averaged 7.5 points and 5.3 rebounds while shooting 53%, 33% and 68% respectively this season.

Travis August: “After a good talk with Coach Inglima, I’m happy to say I have received a scholarship to continue to play basketball and further my education at San Francisco State.”

Out of Liberty High, the 6-foot-2 August averaged 19.4 points and 3.4 rebounds while shooting 37%, 36% and 82% respectively at San Joaquin Delta College this season. 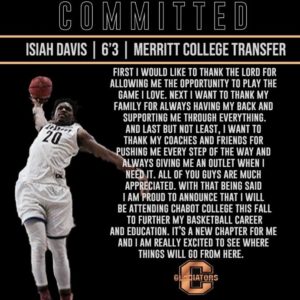 Out of Burbank High, Davis is a key figure as he averaged 15.1 points, 6.1 rebounds and 3.1 assists as a freshman while shooting 53%, 26% and 74% respectively. Let’s see if he has upped his long range accuracy and refined his efficiency. 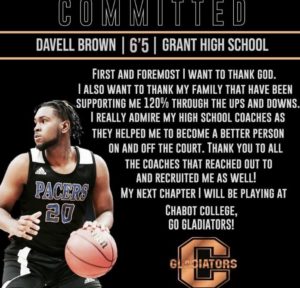 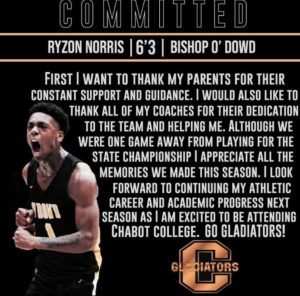 Simply Basketball: “6’9 Dane Johnson of Woodcreek and CVC league MVP will be playing at American River College next season”

Out of Oakland Tech, the 6-foot-7 Davis averaged 11.5 points plus 9.6 rebounds as a senior this season while shooting 56%, 43% and 73% respectively for Coach Rick Croy. He earned Second Team all-Western Athletic Conference honors.

Skyline Basketball: “The @SkylineMBB family is praying for one of its own tonight. Bryan “BT” Thomasson is in the hospital due to complications from blood clots in his lungs. BT is the all-time leading scorer & remains connected to the program through his relationship with many recent players.”

“A SEASON OF LOSS” Mirin Fader