Kiree Hutchings turns to coaching (May 8, 2020) | Nor Cal Basketball

One of the most insightful compliments a coach can offer about one of his student-athletes is saying he would welcome his daughter marrying the player if such came to be. Tangential to such a blessing is hiring a former player as a staff member which also gets to the heart of trust and respect although in the different yet critical vein of earning a livelihood. Like with recruiting, coaches make staff hires based on the positive assets someone will bring to the product on the court, if you will. Additions are to make a program more successful and thus continue a tenure.

Former 5-foot-11 Santa Cruz High guard Kiree Hutchings completed his basketball eligibility at John Brown University (JBU) earlier this year. He averaged 9.2 points plus produced 76 assists and finished with his classes on Thursday despite having to attend on-line of late due to coronavirus precautions.

This coincided with JBU Assistant Coach Tim Kisner landing the head coach opening at Oklahoma City University (OCU) in early April. The genesis of the relationship between Hutchings and Kisner stems from the former playing in the 2014-15 season for the latter, who was then helming the Fresno Pacific University program. 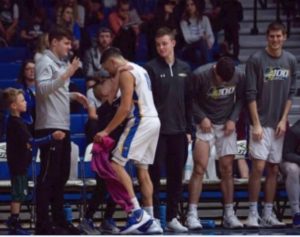 “I’m done playing and Coach Kisner approached me and brought me in,” Hutchings explained. “I will be in the team manager role my first year and also have the opportunity to earn my degree (Business Administration).” After his initial season on staff, Hutchings will compete for lead assistant coach.

“Originally, I didn’t want to go into coaching,” Hutching said. “But this is an opportunity to explore the coaching profession while getting my degree.”

Here’s Kisner on Hutchings: “I have known Kiree and his family for five years and I always thought Kiree would be a good coach. He has great leadership ability, great passion for the game and understanding of what I am looking for as the head coach. I know from coaching Kiree that he has an outstanding work ethic, has battled through some great challenges with his knee injuries and his perseverance is truly admirable. I see Kiree’s role as one where he can develop great relationships with the players, explain things to guys that the coaching staff is trying to get across. He will be a vital piece to our team next year and look forward to working with him.”