The excellence of Zavier Lucero | Nor Cal Basketball 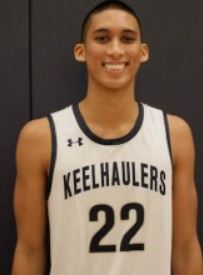 There are high achievers all around us, many one of the backbones to the success of their organizations and yet they often work in the shadows. Count California Maritime Academy 6-foot-6 junior Zavier (Rodriguez High) Lucero as a card-carrying member of this category.

The Keelhaulers finished 20-9 this season in the California Pacific Conference, powered in large part by Lucero’s prosperous nightly contributions of 19.4 points and 10.2 rebounds, with 14 double doubles achieved in 27 games. For the sake of comparison, he averaged 13.6 points and 8.1 boards as a sophomore, 12.3 and 6.7 in his freshman season. He is the all-time leading scorer for the Vallejo-based school with 1,262 points and has a season remaining to up his total.

Lucero received NAIA All America honorable mention honors in mid-March for his prolific output yet remains thankful and humble, acknowledging those surrounding him for his accomplishments. “I credit the people in my corner. My parents did a great job in shaping my character and family means the world to me. I’m fortunate to have their caring and support because I would not be who I am without them.” The fourth of five children born two years apart, his relationship with his siblings extends beyond bloodlines. “I’m best friends with them.”

An important element that bonds his family is music. Lucero plays drums for his church band and his Dad has a band that performs regionally. “My Dad and my brother play guitar and my sisters sing.” 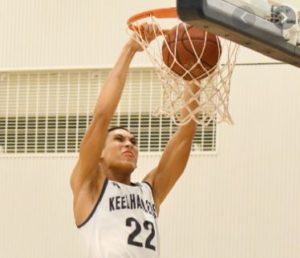 Tagged “low maintenance” by Keelhauler Coach Brendan Rooney, Lucero offered, “everyone in my family is modest. Growing up, it was the way I was raised, just going about things the right way. I don’t want to be what I don’t like in other people.”

Alluding to human frailty, Lucero confessed, “I’ve been cocky in the heat of competition. I’m very competitive and really want to win.”

He added, “I definitely see myself as a leader. I work extremely hard and people see that. They will then say ‘ I need to do that.'” Regarding the vocal aspect of leadership, Lucero explained, “it’s important to know who you are talking to and what picks a teammate up and gets them to embrace you. Basketball is such a game of confidence. I’ve become better at this.”

Consider his unselfish choice when asked for a best basketball moment. “In my freshman year, we were playing Simpson (University) in Redding and down by 20 points with 10 minutes to go. We put four sub-six-foot guys on the court and went up in the game at the five-minute mark.” Lucero witnessed the game, sitting out due to concussion protocols. 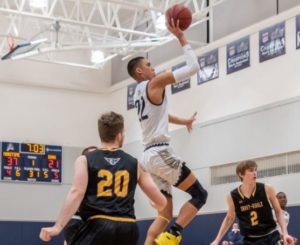 Rooney offered this analysis of Lucero: “he plays both ends and is an elite level rebounder who can score at all levels. His switch is always ‘on’ as a competitor and he lets teammates know when they aren’t bringing it.”

As for his academic achievements, he said, “I take care of myself in the classroom. My parents instilled that importance in me.” An International Business and Logistics major, Lucero liked “the opportunities that came with that degree.” He earned a spot on the President’s List which requires Keelhauler student-athletes to earn a semester grade point average of 3.75 or higher.

So how did Lucero come to choose Cal Maritime? “It came down to a couple of schools. I wanted to be close to home, going to school for free and playing for a winning program. I set my sights on college basketball even though I wasn’t that good and didn’t play much my freshman year (at Rodriguez High). I jumped to varsity as a sophomore and kept playing hard.”

His goals for next season? “Winning league outright and going to the national tournament and making a run.” After that, it’s entering professional ball, laden as always with fire, gratefulness and modesty.