Skyline College Basketball: “Congrats to Noah Haynesworth for earning the opportunity to continue his education & basketball career at UC Davis. Noah has been described as “best teammate ever” a lot over the past 2 years. We are so PROUD that he is an ambassador of our program.”

Chabot Basketball: “Gladiator Basketball is very excited about the commitment of 6’7 215 Jordahn Johnson. Jordahn brings a hi-motor, toughness, rebounding on both ends of the floor and the ability to finish above the rim with touch. Jordahn attended Weston Ranch HS…”

Agebsar is 6-foot-5 and out of Sheldon High.

Derrick Jones: “Congrats to Merritt freshmen guard Japheth Pineda on finishing the semester with a 4.0……also moving on to the 4yr level after 1 season with us”

Derrick Jones: “Shout out to Merritt big man Adam Sindelar for finishing the semester with a 4.0gpa and an overall 3.5 for the year! True student-athlete moving on to Florida National University in the fall.

Sindelar is 6-foot-7 and from Spain

Derrick Jones: “Merritt welcomes Will Hemingway, an athletic G/F with a high motor and 3pt range. Looking forward to coaching him along with the rest of our T-Birds for the 2020-2021 season!”

Hemingway is 6-foot-4 and out of the South Carolina high school ranks.

Antioch High’s 6-foot Kaleb Smith is headed to Whatcom Community College in Washington. His brothers are Quincy who played at Cal State Northridge and Kendall who finished up at Hawaii.

6-foot-5 Gavin Rippere, of Salinas High and Monterey Peninsula College, will be playing next at Clark College in Washington.

Skyline Basketball: “PROUD of our players’ continued success in the classroom. Team GPA of 3.69!! Every guy on the roster achieved a 3.0+ GPA.” 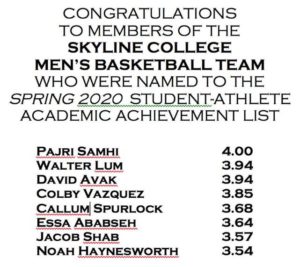