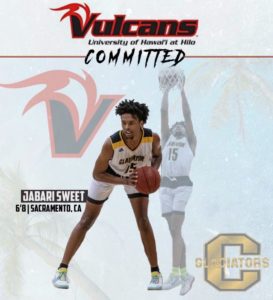 6-foot-8 Jabari Sweet became a really wanted young man this year. Out of Sacramento High and a sophomore at Chabot College in Hayward, he averaged 12.8 points, 6.6 rebounds and 1.0 blocked shots per game while shooting 52% overall?? this season (up from 8.8 points and 5.6 rebounds as a freshman). His size and that production resulted in 25 D1 and D2 schools either expressing interest or offering a basketball scholarship.

Having recently decided on D2 University of Hawai`i Hilo as his next destination, Sweet remains highly desired, especially by his new Head Coach Kaniela Aiona. Formerly in charge of the Menlo College program, Aiona now has Sweet and a 6-foot-9 returning senior as the bigs on his roster and his latest signee is expected to help remedy the Vulcans being out-scored last season by 5.0 points a contest, out-rebounded by 7.9 per game and managing just 47 blocked shots.

What does Sweet see himself bringing to the court? “My scoring, that’s what I’m known for the most. I’m a good rebounder, a pretty good rim protector and a playmaker.” 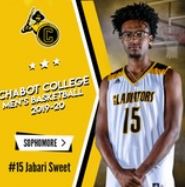 Why did he narrow down his options to the choice of Hilo? “It was the best opportunity for me to keep growing, the best fit. (Chabot) Coach (Keenan) McMiller did a great job of advocating for me.” Aiona was hired in early May and quickly made initial contact with Sweet in mid-May, offering a full scholarship.

Here’s McMiller on his latest talent heading to a four-year school: “As a Chabot College Gladiator, Jabari has become a independent young adult. He completed his Kinesiology A.A. Degree with a 3.02 grade point average and earned First Team Coast North all- conference honors in his sophomore season. What I am most proud of is Jabari’s willingness to learn, his coachability and positive attitude.”

The volume of attention he received was new to Sweet. “I didn’t experience this coming out of high school. At first, I was cool with going anywhere but then I realized I needed some specifications.” Location became one as well as playing style. Being in Hawaii and participating in a high-scoring offense won the day. 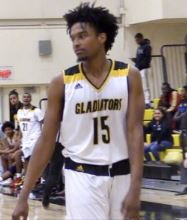 Sweet’s advice to players entering the recruiting process includes “make a plan of what you want to do and stick with it because some four-year schools may want to change how you play. It’s a waiting game process.”

With Dominican University, Academy of Art University, Holy Names University and Fresno Pacific as fellow members of the PacWest Conference, family and friends will be able to catch Sweet during Hawai`i Hilo road games. Plus, as he explained, “my parents plan on coming over for some home games, too.”

He credits his parents for keeping him focused and thanked “my coaches and some NBA players” for being positive influences in his life.

Sweet will major in kinesiology with plans of becoming a sports medicine physician.

Weighing in at 215, he said, “I’m adding more muscle right now by lifting a lot.” Sweet will be heading to school in mid-August.