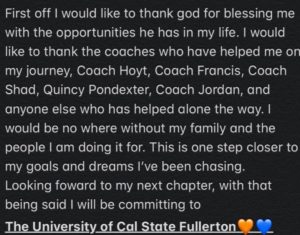 Scoopman TV: “Big time news coming from Grayson Carper today as he has decided to redshirt and retain a year of eligibility.”

From Azuza Pacific athletics: “(Sasha) French returns to his home state of California after two seasons at Albany. During his time with UAlbany, he appeared in 38 games, averaging 1.7 points per game and 1.3 rebounds per game. This past season, French scored a season-high eight points against UMass Lowell. Prior to UAlbany, French spent a season at Napa College.

While at Napa College, he averaged 14 points, eight rebounds, and 1.9 blocks per game. During a three-game span, French scored 25, 27 and 25 points, while also registering two double-doubles during that stretch with a 14 rebound game and an 11 rebound game. His efforts that season culminated in a First-Team All-Bay Valley Conference selection, as well as CCCAA All-State Honorable Mention recognition.

Before he starred for Napa College, French spent one season at Division I San Francisco, where he redshirted.

Prior to the start of his collegiate career, French played high school ball through his junior year at Justin-Siena High School, and then played at two prep schools, Prolific Prep Academy of Napa for his senior year, and the Hun School (Princeton, New Jersey) the following season. While with Prolific Prep, his team was nationally-ranked and played a national schedule. At the Hun School, French was named First-Team All-Mercer County after he averaged 9.5 points, seven rebounds, and 2.5 blocks per game.

Coach Bond on Sasha: “One of our biggest priorities for our roster this year was to add a big man with a good amount of experience under his belt. Sasha is not just a big man with experience, but he does a number of things well on the court. He moves well, runs the floor, blocks shots, has good touch, and he can step out and shoot from the perimeter. The types of guards we have on the roster will make things easier for him, and he will make things easier for our guards. Sasha did a lot of homework in the recruiting process by asking a lot of good questions, and both of us knew he was going to be a good fit for our program. I admired his patience and willingness to trust his own process instead of rushing to a decision. Similar to Tre, Sasha wanted to complete as much of his Master’s degree as he could during his final year of eligibility.

Sasha on why he chose Azusa Pacific: “Coach Bond is such a player’s coach and I felt like I had a connection with him from the first time he called me. I was talking to a couple Division I schools, but after talking to some of the players and seeing the kind of need Azusa Pacific had for a big man to replace Selom Mawugbe, I knew this was the right place for me. I also wanted to go somewhere that I could get an MBA and Azusa Pacific had exactly what I was looking for. I am looking forward to competing with this team and winning the PacWest next year.”

Simply Basketball: “6’8 Garret Keyhani (2022) has transferred to Serra. Will be an impact player for the Padres in the WCAL”

He was attending Menlo School.

Yaru Harvey: “Beyond blessed to have received an offer from UC Riverside!”

A first three-time Big West Defensive Player of the Year honoree, the 6-foot-10 big is out of UC Irvine and Salesian Prep.

Siskiyous Basketball: “Excited to add Keegan Folchi (G, Portola High School, Portola,CA) to our program. Keegan averaged 15ppg, 4asst and 2stls was named all conference and is the all time leader in made 3 pointers at Portola High! Welcome to the family Keegan!”

Play in front of 400 fans with some of the West Coast D1 teams or a rockin’ house in Chico. Not a hard decision.