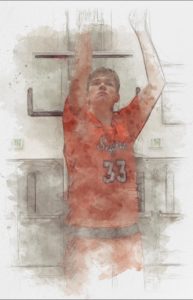 The current basics: 6-foot-10, 230 pounds. Good mobility. The ability to score both inside and facing the hoop, plus strong rebounding.

The always present bonus: the willingness to ‘live’ in the gym and put in the work necessary to fulfill his potential.

Tyler Harris came out of Scotts Valley High (near Santa Cruz) in 2018 after averaging 11.3 points, 7.9 rebounds and 4.2 blocked shots and selected Dallas Jensen and Gavilan College as his next hoops coach and destination. His dual goal: get his college education paid for while advancing as far as possible in the world of basketball.

The primary reason behind the choice of Jensen was the connection: “He is a very genuine person,” Harris explained. “He means what he says and does. You have to teach everyone differently and he makes sure you’re doing things right and putting in the effort.”

Gabe Gonzales was another factor in Harris’ Gavilan decision. The varsity assistant coach at Scotts Valley High and head coach/director of the Scotts Valley Warriors AAU program, he and Jensen both attended Gilroy High and have remained in touch.

Once Jensen became aware of Harris, he called Gonzales stressing his interest and followed up by attending a few games. Harris cites Gonzales as a critical basketball influence. “He’s my longtime coach and has the same constructive character as Dallas.” Gonzales has mentored Harris since the third grade through recreation ball, middle school, high school varsity and with the Warriors.

“During Tyler’s college years, we have come a lot closer,” said Gonzales. “Each time he comes back for the summer, he calls me and we basketball train. This relationship has truly been grown and it’s been a pleasure coaching him over the years. I cannot wait to watch him play this season.”

As a Gavilan freshman, Harris posted modest numbers in 9.7 minutes per game: 2.6 points, 2.3 rebounds and just under a blocked shot while shooting 43%, 21% and 50% respectively.

Then in late May, 2019, Jensen made a move to head the College of the Sequoias program down in Visalia. Harris followed even if that meant grayshirting the season. Sitting out a season is always tough to do but Harris, as a team member, still practiced with the team and attended every event. The bonus: advancing his skills levels and building a better body. “Twice a day, I worked out either in the gym or the weight room. It became fun and felt normal.”

Asked what are his best court assets today, Harris offered, “I’d probably say rebounding, my IQ and re-directing traffic in the lane” A touch overly modest, he didn’t mention his soft touch in the paint and his shooting range.

Another element arising from the past two years for Harris “I’ve learned I can’t just rely on my size and found that out by playing against better players.” Plus, “I’m more smart and mobile now and can guard more positions. I’ve also worked on my ballhandling.”

He cited three events as his best basketball moments to date: “winning the conference at Gavilan, playing in my first game in college and playing three games in China,” the latter being a recent basketball trip that included Harris because of Jensen knowing the individual who was setting up an Asian hoops itinerary.

School just started at Sequoias and Harris’ academic work will be on-line for at least the first semester. Precautionary protocols will be in place when the team begins practicing. “Coach has told us to be prepared to practice on outdoor courts.”

He is a business major.

Regarding recruiting, Harris is wide open, seeking a best fit.