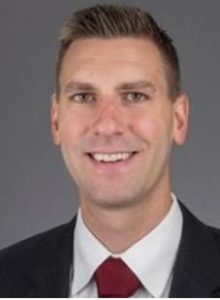 A unique mathematical equation exists where one plus one can equal more than two. Gather a group of people together whose positive attitudes, beliefs and work ethic dovetail and the chances of creating something larger and more important than the individuals involved increases. Call it a living demonstration of the ‘we’ versus ‘me’ perspective which creates its own natural momentum.

The professional and personal sides of Chico State assistant basketball coach Mark Darnall is one such example. Having prospered on the court both playing and coaching, alongside earning a master’s degree plus a B.A. degree in sports management, a critical component to his overall success is positioning. That is locating opportunities where his would-be associates, be they fellow players or coaching accomplices, display a similar mind because fit is as important in coaching as it is with a prospect choosing a school.

Sporting an advanced degree afforded Darnall multiple employment directions but his uncle Dave Darnall coached Eureka College to a national basketball championship and his father coached in the junior college and high school ranks. If that wasn’t enough of a heavy thumb on the scale of his vocational direction, Darnall worked the Hoop Group basketball camp as a college junior as well as many other hoops camps in Illinois, including his uncle’s. He recalled impressive speakers at many of the events, including 7-foot Dave Corzine, Jack Sikma and Mickey Johnson, all longtime National Basketball Association (NBA) players. Current UC Davis Coach Jim Les, who gave the younger Darnall his coaching staff start, also made guest appearances at Dave Darnall’s camps for almost a decade. Les played seven years in the NBA and his 46% accuracy led the league in three-point field goal percentage in the 1990-91 season.

Under Les, Darnall was a member of the coaching staff when the Aggies captured the Big West championship in 2015 and earned an NIT post-season invitation. 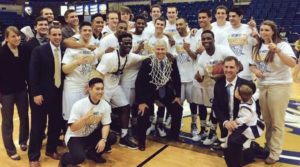 Chico State has earned post-season appearances in seven of the last nine years–the most in the West Region–and posted a 23-7 overall record before the coronavirus shut down the 2019-20 post-season. The  latest reinforcements signed by the Wildcat coaching staff are 6-foot-10 Isaiah Holm plus 6-foot guard Evan Oliver, both out of the high school ranks, alongside community college transfers 6-foot-7 Kaleb Carter, 6-foot-7 Dylan Belquist and 6-foot-4 Michael Hayes, the latter a California community college co-player of the year out of Las Positas College.

A prestigious honor arrived recently when Silver Waves Media honored Darnall this July as one of the 50 most impactful Division II assistant coaches in the country. This “after months of research and consulting with AD’s, Presidents, search firms, and numerous influencers in the basketball space…” 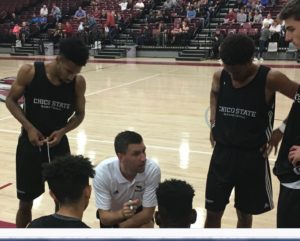 “I like the challenge of pulling a group of guys in a common direction and the leading aspect,” he explained. “The biggest reason I coach is the relationships, not just with Greg (Chico State head coach Greg Clink) and our players but also my colleagues throughout the coaching department.” Regarding the latter relationships, Darnall explained, “It’s a few and far between situation and something really special about Chico.  I love working for Greg and with the players. He and all the guys are so fun to be around.”

Darnall continued,  “I get great satisfaction from all the aspects of my job–the strategy of basketball and how you can play something so many different ways–and I’ve learned from so many coaches  There’s the opportunity for mentoring kids from diverse social backgrounds, with every kid a little different, and it’s great to see them step out of their comfort zones and grow. Out of our (current) group, one is planning to be a civil engineer and another a lawyer. A few of guys learned to trade on the stock market over the summer. It’s a well-rounded group.”

Continuing, “We sometimes forget how in tune and aware they are with matters outside the gym as they also have a variety of opinions on racial justice and the upcoming election.” Every Chico State basketball player has registered to vote in the November election.

In alignment with the times, “In June, we had two former players who are now deputy sheriffs (Rashad Parker, Alameda County and Damario Sims, Santa Clara County) participate in a Zoom meeting with our guys because of the emphasis right now on social justice and police, and they provided interesting perspectives on being Black in America and in law enforcement.”

Regarding a prescription for coaching success, “My advice is just to put your head down and work hard after you get your foot in the door. The first two years of any job are the most important and your work ethic has to take over. I learned the game and how to develop a culture from good people, the leaders I’ve worked for, Greg Clink, Jim Les and Jeff Gard.”

Darnall also maintains relationships with Argenal, Lucas Gabriel (Bellevue University Head Coach), and Chris Cobb (Montana Associate Head Coach), all former Wildcat assistants. “I have such great respect for these guys because, along with Greg, they helped make Chico what it is today. They did a great job of turning the Chico program around and are a big motivation for me to continue to do a good job here. They have helped me a lot.” 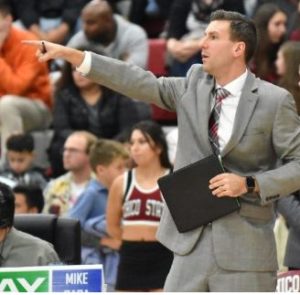 “We’re very straightforward in the recruiting process. We tell you the good and bad about Chico and our program, and we don’t twist anyone’s arm to come here–that’s how you get into issues. We’re very specific in our recruiting and we’ll put our culture up against anyone.”

“We’re big on collaboration. It’s ‘our’ recruits and our coaching staff perform multiple evaluations on a prospect. It’s ‘our’ guys, never ‘my’ guys.”

“Basketball is a naturally selfish-driven sport and, at its highest level, the NBA guys are praised for their names on the back of their jerseys. We had five guys average between 10.7   and 12.4 points a game this year and played 10 guys in the rotation. Great things can happen when everyone buys in but its a huge challenge.”