Catching up with Isaiah Brooks | Nor Cal Basketball 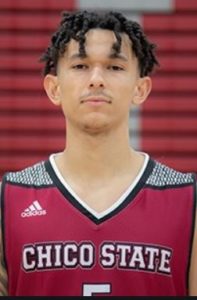 For a basketball player, it’s called court vision but that label is incomplete. Seeing what is taking place during a game is certainly important and a positive but understanding what offensive and defensive player movements will likely happen next goes beyond capturing just the present options and this skill separates the better from the good players. Isaiah Brooks possesses this special savviness.

“My mind is my best asset and my mental and physical stamina are great,” explained the 6-foot-1 Chico State senior guard. “The game slows down for me and I can tell what is going to happen before it takes place. I think about the game, how its progressing and about adjustments. I’m prepared to deal with crowds and I know player tendencies and matchups. Basketball is so simple yet at the same time very complex.”

Regarding his leadership style, as expected, Brooks makes continuous assessments. “It’s up to me to figure out what is needed–encouragement, a pat on the back, or something more. It’s sometimes annoying but every possession counts. Leadership is holding yourself and others accountable.” The foundation is Brooks’ understanding that “there’s no way I can do this unless I’m giving my all physically and mentally.”

He resides in the camp of completing tasks and assignments as quickly and soundly as possible. “A lot of people think they just have to work harder but I prefer stepping outside of the box in order to become a better player and person. It’s work smarter versus harder. Why study all night and get no sleep? Our energy and efficiency philosophy starts with (Chico State) Coach (Greg) Clink and, as captain of the team, I carry that out.” 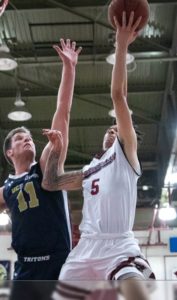 “In my junior year in high school, D1 was definitely what I wanted to do.” Besides Chico State, he received looks from UTEP, UC Davis, Sacramento State, Cal Poly and Cal State East Bay. “I did a visit to Chico and, as a program, I found it better than many D1s. It was close to home and with good academics. The students know who I am, the boosters pass by and ask ‘what’s up,’ and we are the main event in town since Chico doesn’t play football.”

Impressed with his initial viewing, Clink recalled, “The first time I saw Isaiah play in high school I knew I wanted to coach him. He has an amazing basketball IQ and really knows how to control the tempo of the game.”

Brooks participated in Clink’s practice of redshirting almost every new recruit and it was actually a blessing. “I graduated from high school at 155 pounds and I was practicing against guys like Robert Duncan, Corey Silverstrom, Tanner Giddings, Isaiah Ellis and Jalen McFerren. I also didn’t know how good the league (the California Collegiate Athletic Association) was from the first to the last team–you really have to scout properly. It’s very rare that a team goes through league undefeated.”

His remedy for catching up: “I lifted weights, got stronger and got better.” According to Clink, “Isaiah has matured so much both on and off the court during his time here and he’s been an absolute joy to coach. He thinks the game, breathes the game, and lives the game. He is a coach’s dream, developing so many leadership qualities in the last couple years and, along with being a great point guard, Isaiah is even a better person.”

Another element that positively changed Brooks was switching diets. “My Dad went vegan my junior year in high school. I was 16 and like, whatever, it is what it is.” But Brooks became more and more intrigued and eventually joined in with gradual changes. “First I dropped pork, then beef followed by no more chicken. Milk and cheese came later. Cheese was the hardest to give up. I finally figured it out in mid-2019 and dropped all processed foods. Its all plant-based foods for me now.” Brooks initially lost a few pounds but his new diet, combined with working out, currently has him at 185 solid pounds. “I’m all league and successful so it’s working.” His dramatic switch also influenced teammates Joshua Curls, Joshua Hamilton and Calvin Geraci as well as former Assistant Coach Thomas Ammon to change the types and amounts of protein they consume. And according to Brooks, “my Dad is 6-foot-3 and weighed 220. He has dropped 45-50 pounds and looks so different. We can even wear some of the same clothes.”

Asked to detail his top hoops memories, Brooks recounted a trio of events. “In my freshman year, we were in the West Regional Final against (host UC) San Diego and won (95-86). That brought so much joy because of how much better we got throughout the season. My sophomore year, we had a losing season (9-14) due to injuries and the Camp Fire limiting our number of games.” Chico State played just one non-conference opponent that season.  “The other teams (in league) were playing their seventh, eighth or ninth games. We took it as a time to grow for next year and the year after.” Brooks averaged 11.1 points alongside a 94-41 assist-to-turnover ratio. 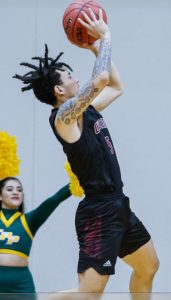 “Then this season, we were down early against (host Cal State) Dominguez Hills” as Chico finished the first 20 minutes on the wrong end of a 46-38 score. Former Wildcat guard Michael Bethea Jr. was in attendance that night and entered the locker room on a mission. “He told us that we were not losing this game. It was so emotional I almost cried.” Inspired by the vow, Chico finished on top 86-81 with Brooks totaling 20 points on 3-6 long distance shooting. As a redshirt junior, he averaged 10.7 points and 3.1 rebounds per game as well as posting a 115/46 assist-to-turnover ratio while grabbing 29 steals.

Winning that matchup against Cal State Dominguez Hills was important but demonstrated a more critical component. As Brooks proudly exclaimed, “the Chico State Wildcats look out for fellow Wildcats–we stick together. The family aspect, on and off the court, is unbelievable.”

Brooks cited his parents as his biggest basketball influences with his point guard education beginning early. “I was introduced to the play of Allen Iverson, Jason Kidd and Tony Parker. I tried to emulate AI–I had the headband, I had it all.” Later on and up to the present, it was the likes of Steve Nash, Chris Paul, Rajon Rondo, Trae Young and Fred VanVleet contributing to Brooks’ basketball enjoyment and education.

Majoring in psychology, Brooks foresees a number of employment possibilities. “I’d like to be an entrepreneur but I also have interest in becoming a psychology professor or something in sports psychology. But I want to always be involved in basketball.” Always thinking ahead, preparing to seize opportunities, that’s Isaiah Brooks.