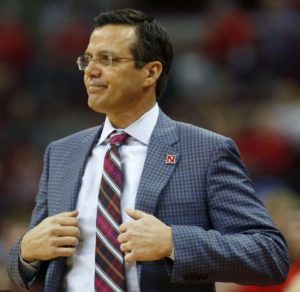 Really? Did anybody call this one? Show of hands? Liars.

So who is he? Why was he hired? Let’s dig into the known.

The financial elements of his San Jose State University contract are presently unknown (and critical to understanding the hire) but Miles’ loquacious, sometimes snarky personality is a definite departure from the norm, and a plus. To his credit, he is well-lauded for connecting with fans and the community in previous positions.

Also, since his departure from Nebraska, Miles has worked as a color commentator on college games while also offering offering various takes on twitter and podcasts (Inside the Mind of Miles).”

Here’s a 2014 article that provides insight on his personality. An excerpt: After a poor effort by his Cornhusker team in February 2015, Miles locked his guys out of the locker room (an action he later apologized for but you have to appreciate).

After landing the job at Colorado State, Miles offered, “We have rebuilt three college programs from the ground up and made them nationally competitive in a matter of just a few years. How? We work to create an environment around our team which develops a sense of purpose. We nurture a culture of accountability, hard work, and togetherness.”

(conference records being the most telling)

Miles interviewed at California in March 2019 (Mark Fox hired), talked with Wyoming in March 2020 (Jeff Linder hired), and ‘supposedly was involved’ this year with New Mexico (Richard Pitino hired), although he denies any interaction regarding the Albuquerque opening. This article says differently.

His starting salary as a Cornhusker: “Miles was given a seven year contract starting at a base salary of $1.4 million with a guaranteed minimum raise per year of $125,000.”

When Miles started at Colorado State in 2007, he hired this trio of assistants: Niko Medved, Mark Amaral and DeMarco Slocum. Medved is now the well-regarded head coach at Colorado State, Amaral assisted at Pepperdine, UC Santa Barbara and Cal Poly and is now an associate head coach for the Xinjiang Flying Tigers of the Chinese Basketball Association and, coming over from UNLV, Slocum just landed back at Utah as an assistant, a position he held for eight years under former Ute coach Larry Krystkowiak. Craig Smith, Miles’ Director of Basketball Operations, just took over the head coach position at Utah. That right there is an impressive coaching tree.

It’s curious and a bit concerning Miles hasn’t been pushing all that often to be hired since his time in Lincoln ended in 2019 but a monthly check for over $100k is quite the unemployment soft landing.

Why hire someone whose coaching ties are strictly in the Midwest? Do watch both for Miles’ selection of assistants and initial pair of SJSU recruiting classes as new coaches can ‘sell’ immediate playing time to prospective recruits alongside the opportunity to forever be known as the guy/guys who turned around a forsaken program. Two immediate solid recruiting seasons will be telling (and necessary) while so-so classes early on will be indicators that more of the same old-same old will be in store.

Where at the major level (Colorado State and Nebraska) has Miles demonstrated an ability to land the level of recruits necessary to annually compete with the top tier of teams in conference?

Why hire someone who enjoyed inconsistent success at his last program (Nebraska) before being let go (52-76 in his Big 10 Conference tenure)? The Cornhusker administration provided him with the necessary resources to compete.

At SJSU, Miles isn’t earning anywhere near even his starting salary at Nebraska. In fact, he won’t be making a million a season. So will the fire-in-his-belly be roaring?

In summary, Tim Miles’ Spartan tenure won’t be boring. It’s a lock that a lot more attention to details will be displayed by his new players as will a greater emphasis on defensive effort be visible but will he be successful where so many have failed? We’ll have a large portion of that answer in a mere 12 months.

So what happened to the candidacies of David Patrick and Rick Croy? The details of Miles’ contract will tell us a lot.

Both are previous interviewees for the Spartan head coach position so SJSU administrators already possessed a solid sense of each applicant. The feeling out element during the formal interview process wasn’t necessary. Financials, though always critical, likely played a major role in how the hiring process ultimately played out.

However, both Patrick and Croy are currently in solid situations, albeit Patrick is an assistant coach.

Regarding Patrick: “New University of Arkansas assistant basketball coach David Patrick is guaranteed $1 million in total financial compensation if he stays on the job for two seasons.

Patrick, who was head coach at California-Riverside the previous two seasons, has a two-year contract at Arkansas with an annual financial package of $400,000. His contract also includes a $200,000 retention bonus if he remains employed by Arkansas through the end of the 2021-22 season, including all tournament games. The bonus will be paid by April 30, 2022.”

As for Croy, his contract figures are private. Cal Baptist plays in a new 5,050 seat Events Center and the average attendance at Lancer games, 3,090, was bested in southern California only by San Diego State, UCLA and USC in 2020.

Miles is taking a big pay cut to get back into the college coaching ranks (the so-called handwriting was on his wall) but the odds are great he will still cost more than Patrick or Croy were requesting. Very interesting.