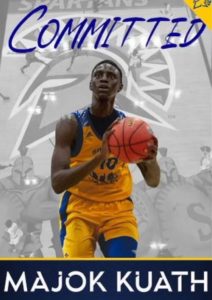 Majok Kuath: “Appreciative isn’t even the word to describe how I feel. Huge thank you too @jaycyriac and @CoachEck20 for believing and pushing me everyday. Without them this isn’t possible at all. With that being said, San Jose, what’s up?!”

Kuath is a 6-foot-6, 185 pound sophomore who averaged 13.0 points (third on the team) plus 6.6 rebounds per game (second on the team) this season while shooting 61% overall and 69% at the foul line (he didn’t attempt a three-pointer). In 25 games and 24 starts, Kuath played 29.2 minutes a contest. A live body, he also blocked 54 shots on the season for the Kansas-based 19-7 Hutchinson Community College Dragons.

Originally from Sudan, Kuath has a 6-foot-10 brother who played at Oklahoma and is now at Marquette.