Mahda Fallay calls it for Stanislaus State | Nor Cal Basketball 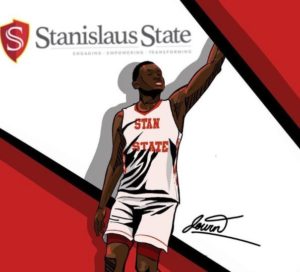 Mahda Fallay is thankful to many. The 6-foot-6 2021 Moreau Catholic High and Lakeshow talent recently signed with Stanislaus State and while that is certainly a substantial accomplishment, the blessings he offers to those who aided him in his journey also stand out as indicators of Fallay’s high level maturity and discernment.

In detailing his supporters and influences, Fallay offered, “Definitely my Mom and Dad who kept me focused and taught me to work hard, and my (late) brother and sisters. My city (Oakland) and community too which has a great history with Jason Kidd and Gary Payton, (Moreau) Coach Frank Knight, the Fuca family of Lakeshow, T.J. Taylor, Bam Samuels, Seth Jones and Curtis Cooper.”

Even the country of his parents’ origin received a deserved shout out. “My Mom will hand me the phone and someone from back in Sierra Leone is telling me to keep up my good work.” Sierra Leone is located on the southwest coast of west Africa.

As to the why of aligning himself with California Collegiate Athletic Association member Stanislaus State and Coach Paul Trevor, Fallay explained,”it was a good atmosphere and I felt at home on my visit. It will be an opportunity to showcase my skills.” What turned out to be an important element? Stanislaus utilizing a slide show demonstrating how Fallay will be used. “It helped me understand how I’ll fit in.”

He received his offer in July with Trevor and Company making initial contact in October 2020.

Besides home games, his family and fans will also have the option of catching the Warriors on the road in nearby Hayward (Cal State East Bay) and at San Francisco State, Sonoma State and even Chico State. 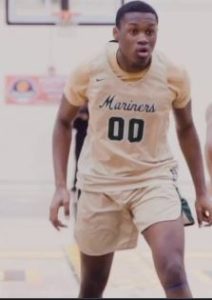 So what will Stanislaus fans witness in the 2021-22 season? “I’ll bring leadership in communicating with my teammates, toughness, energy, competitiveness and a high level motor.  I can guard all the positions on the floor and I’m a great team player who loves the game.”

Here’s Lakeshow Coach Joey Fuca on Fallay: “Mahda is a two-year Lakeshow stud. He brings instant energy off the bench and is a winner who does all the little things. Paul Trevor is getting a steal this late with an unbelievable kid on and off the floor. Congrats Mahda!”

A native of Oakland, Fallay began his sports involvement with football “but when my parents suggested I try basketball, playing in my first AAU tourney was enough.” Football disappeared in the rear view mirror likely to the chagrin of many a college tight end coach. Noting his progression, Fallay said, “as a freshman, I was more of a big and couldn’t shoot or handle well. But I brought the ball up and passed and shot well as a senior.” He attributes a portion of that improvement to watching film of Jason Kidd, Celtic forward Jayson Tatum, Jimmy Butler of the Miami Heat and Draymond Green of the Warriors”

Fallay heads to Turlock later this month, sporting a 3.5 grade point average and with a Business Management major. His focus will be on entrepreneurship.

“I’ve taken a step closer to one of my dreams.”