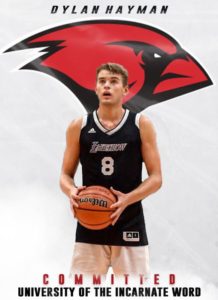 Dylan Hayman owns a win over Sisyphus, bouncing the rock to and over the top of the proverbial hill amidst pressure of a looming deadline. Now the 6-foot-6, 195 Healdsburg High graduate is headed to San Antonio, Southland Conference member University of the Incarnate Word (UIW), in particular.

“I wasn’t discouraged because I knew something should definitely be happening,” he explained. Hayman received earlier D1 offers but they were pulled back when the NCAA granted players an extra year of eligibility because of the COVID-19 truncated 2020-21 schedule.

After being heralded in social media for his play with Lakeshow in various travel team tournaments this summer — Roger Bohn of SLAM Magazine tweeted, “Not sure if anyone helped themselves more for @LakeshowHoops, than 6’7 ’22 Dylan Hayman of @VermontAcadHoop. Serious athlete with a strong frame who can play inside and out. Explosive straight line driver who showed 50+ coaches this past game that he’s D1 guy.” Hayman acknowledged this analysis with a modest “I played pretty well.” 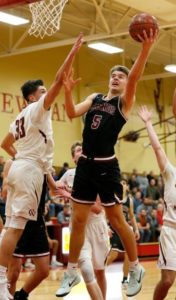 He was contacted by UIW a week or so after returning from Las Vegas, his final showcase. “They had an open scholarship because a starting wing was transferring. We then did our due diligence (on the school and program).” A couple of phone calls followed by a Zoom session with the UIW staff and Hayman’s parents meeting resulted in the Cardinals extending an offer and Hayman accepting a day later on August 5.

From his chats with UIW Coach Dr. Carson Cunningham, Hayman received no promises. “He said I’ll be in the mix for minutes.”

Hayman heads to Texas on August 22 with classes beginning the next day.

Lakeshow Coach Joey Fuca is enthused, offering, “Dylan is a first-class player on and off the floor. He had an incredible summer on the highest adidas circuit. Incarnate Word got a steal.”

Of his longtime player, North Bay Basketball Academy’s Brock Winter said, “We are extremely excited for Dylan on his signing with Incarnate Word. Dylan has worked tirelessly over the past two years with our trainer, Michael Turner, as well as playing in the 2020 fall season and 2021 spring season with Doug Donnellan and myself on our High School Showcase Team. This summer with Lakeshow, Dylan made the most of his opportunity and turned that into a D1 scholarship. We couldn’t be more proud and happier for the Hayman family.” 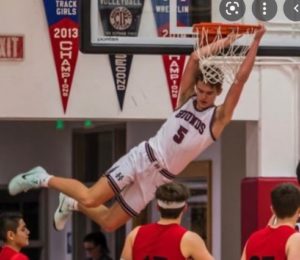 Hayman set up another option in case the right offer didn’t appear. “I was headed to Vermont Academy as a post grad.” He and Winter of  evaluated prep schools in the New England area and determined Vermont Academy as the best fit.

Asked to name his best basketball moments, he offered, “winning league because it’s great when the commissioner comes with banner, any road wins and game-winners.” Hayman enjoyed four of the latter during his time at Healdsburg High.

As for influences, basketball and otherwise, he noted, “both my parents because they work extremely hard and almost all my basketball coaches.”

Successful both on the court and in the classroom, Heyman earned 2021 First Team All State honors based on 25.5 points and 12.5 rebounds per game as a senior, alongside a 3.9 grade point average. He will major in Environmental Sciences, with an agricultural emphasis.

As for Sisyphus, he’s still unsigned and is working on his handle.