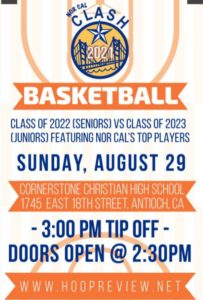 The 6-foot-3 Virnig is out of Justin-Sienna High.

From the Three Man Weave look at Illinois in 2021-22: “…Sophomore big man Coleman Hawkins has gotten a ton of buzz this offseason as a player who could blossom in his second year. From the Daily Illini, Underwood heaped praise on the lanky big man:

The 6-foot-10 Hawkins is out of Antelope High and Prolific Prep.

Siskiyou Basketball: “Excited to add Jacob Condez (5’10 guard) from Wood High School in Vacaville, CA to our program. Jacob was voted MEL All League and averaged 6pts, 3.5 asst and 3 reb. Welcome to the family Jacob!”

That’s Northfield Mount Hermon, a prep school in Massachusetts. Carrington is 6-foot-5 and out of Sacred Heart Cathedral.