The multiple talents of Noah Thomas | Nor Cal Basketball 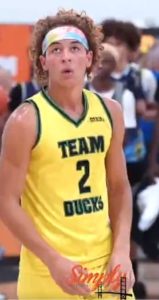 Need a basket or a defensive presence? How about a pass reception or maybe an interception? Got any track events requiring jumping high or long? Who you going to call? 6-foot-3, 180 Noah Thomas of Pleasant Valley High (Chico) and the Norcal Ducks, that’s who.

The definition of versatility, the 2022 prospect participates, no, make that shines, in three sports — basketball, football and track — with hoops his preference and the activity he has played the longest.

Asked to detail his best basketball skills, Thomas offered “going to the basket and getting past my defender, my defense and I have a pretty good outside shot. I do consider myself a leader, mainly by example.” He earned Most Valuable Player honors on his Pleasant Valley team as a sophomore, moving up to All Eastern Athletic League (EAL) status as a junior. Asked what has changed the most in his game since his first year at Pleasant Valley, Thomas said, “from my freshman season to now, I have really stepped up on defense, applying pressure the whole game” Also, “I expect to be used as a shooting guard in college but I can play as a combo.”

Playing flag football as a youngster before moving up in physicality to the tackling version upon entering the eighth grade, Thomas owns a Defensive Player of the Year honor performing as a cornerback. He also lines up on offense as a wide receiver.

What Others Are Saying

Tim Keating, the longtime Pleasant Valley High basketball head coach, is effusive with praise. “Noah is a great kid, very athletic, tenacious, unselfish and I love his work ethic. He’s fearless with a huge motor and goes to the rim against anybody. He’s a quiet kid and we’ll work on his voice this season.”

Thomas is also a member of the Norcal Ducks Chico-based AAU team. Courtney Bobinger, head coach of the squad, offered, “Noah is an energy guy and one of our hardest working kids. He gets to the basket, knocks down threes and scored 43 points in an Arizona Summer Sizzle tournament game this summer. His defensive tenacity results in a lot of deflections. He’s quiet and super smart with a 3.8 grade point average.” 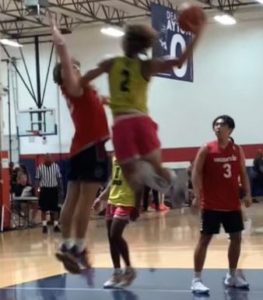 Ponder that for a moment — playing three sports, considering the enormous time commitment that requires, and performing equally as well in the classroom.

Asked to name a prominent influence, Thomas offered, “My Dad because he’s been coaching me up for years.”

Thomas prefers staying on the West Coast for college “but I’m wide open to any offers. He wants to go where “the team plays fast, getting up and down the court, and where I feel welcomed.” The University of Puget Sound offered him in mid-June and he’ll be taking an official visit on September 25.