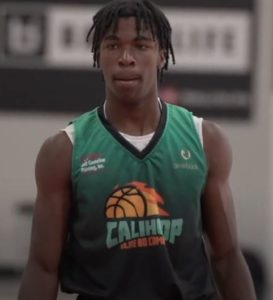 6-foot and 160 pounds are not eye-popping physical numbers, especially in basketball. But with excellent hand-to-ball control, a quick first step plus a very low dribble when starting a penetration, possessing the ability to immediately stop and then start again and making on-target passes that feed the shooting rhythm of teammates, all make DeMarreya Lewis-Cooper of Enterprise High in Redding an intriguing point prospect. Knowing what to do and when, alongside the patience to probe defenses, are also positive attributes. 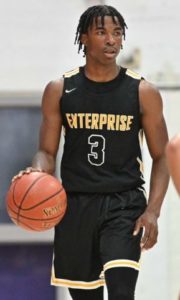 A 2022 class member, he scored 15.0 points per game (39 treys), alongside 4.8 rebounds, 2.7 assists and 2.4 steals as a sophomore and his production earned him a repeat of All-Eastern Athletic League honors as well as an All-Northern Section First Team selection. Lewis-Cooper was the sole underclassmen to be honored. His junior season consisted of just six contests due to COVID-19 restrictions so he’s anxious to participate in a full senior schedule.

As to why hoops, “with my Dad and my sisters playing, I grew up with basketball and developed a love of the game,” Lewis-Cooper recalled.

He has also enjoyed the advantage of playing one position his entire hoops tenure, thus developing the intricacies required for the most difficult position on the court. “I’ve been at the point my whole life and that has aided the development of my court vision and dribbling.”

Long time NBA guard Allen Iverson is a personal fave of his, a choice that says a lot. “I like his attitude, his dog mentality.” 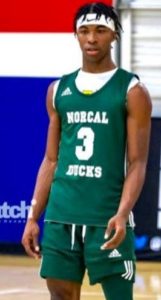 Lewis-Cooper added, “I wasn’t much of a scorer as a freshman but I took control.” His scoring perked up as a sophomore. Seeing himself as a leader — “for the most part by example” — he is also back on the gridiron this season, now as the starting quarterback (naturally), having played wide receiver as an underclassman.

Enterprise High Assistant Coach Abie Ramirez called Lewis-Cooper “our captain, our leader and our playmaker. He initiates everything for us on offense and defense. His play is his leadership, he has that persona about him with the way he conducts himself. But he also instructs the kids in a quiet way. If someone is out of position, Demarreya will go to him and show why he needs to be here and not there. He’s an instructional leader.”

During the spring and summer. Lewis-Cooper plays for the Norcal Ducks, an organization led by Head Coach Courtney Bobinger. “I’ve had DeMarreya since the eighth grade and he had a breakthrough summer, scoring 55 points during a tournament in southern California and forcing the Indiana team we played to go into a zone because they couldn’t stay in from of him.”

She continued, “He is a true point guard, a floor general who sees the floor and interprets what we need to do. DeMarreya is a quiet but well-respected leader.”