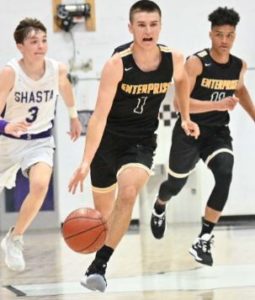 Brennan Ramirez is laser-like both on and off the court. The 6-foot-2 Enterprise High guard zeroes in on basketball as the top long and mid-range shooter in the Butte County prep ranks and also maintains a bedrock practice of retaining focus in the classroom and with his personal relationships.

Taking a unique route, Ramirez did not participate in travel team ball this summer. The reason? Besides always aiming at improving his shooting despite already leading the Eastern Athletic League in three-pointers made as a sophomore, “I worked all summer on my ballhandling and other skills with Thurman Knowles,” who attends D2 Colorado School of Mines and sharpshooter “Tyler Green, who plays professionally overseas. I needed to learn what was necessary for me to do to get better. I love the game and want to be my best.” Knowles is out of Foothill High and Green played at Enterprise High and then Montana State-Billings.

So what did Ramirez do with his time during his 11-week summer hiatus? “I was up at 5:00 a.m., working out 3-5 times a day Monday through Friday while also taking an on-line college class.” He took two weeks off over the entire summer.

For three of those summer weeks, Ramirez also lifted weights from 8:00 – 9:00 in the morning with the football team. His reasoning: “I wanted to demonstrate to my football-playing teammates that they could do both football and basketball workouts. My intent was to get them to also show up for the basketball activities.”

All this while also working manual labor jobs and operating his own pressure washing business.

Academically, Ramirez posted 4.2 grade point average as a sophomore only to raise it to 4.5 as a junior. “I’m taking AP classes and already have 25 college credits.”

“It’s all based on hard work,” he said. “I’m smart but not crazy smart and I’m athletic but not crazy athletic. But I believe I can outwork anyone. I have one shot to play college basketball and I’m not going to waste it.”

A four-year varsity player, Ramirez added with emphasis, “I’m 100% a leader, both vocal and with displaying my work ethic. But I don’t just want to lead on the court. Life isn’t all about basketball and I don’t want to lose sight of everyday things.” He continued, “I keep my social circle small” but bonded with a fierce loyalty. Part of that may stem from losing his best friend Zachary Schenone in a car crash, someone he still counts as influential to this day. “He is my inspiration for doing everything to the fullest, for him.”

Brennan is the son of Abie Ramirez, a 6-foot-7 Enterprise assistant varsity coach and teacher who also played at Enterprise, then signed with UTEP before an ACT change required attending Shasta College. That was followed by two seasons at Utah State. Next came a transfer back to Shasta so he wouldn’t have to sit out a year, earning First Team All State honors and aiding a first-place finish in the Golden Valley Conference, then a move back to D1 at Sacramento State on another full ride. In both his upperclassmen seasons, Abie led the Hornets in scoring and rebounding. According to his son, his father still has ‘it.’ “My Dad is still dunking even at close to 50. I grew up watching him and what he was doing.” Word is the elder Ramirez is still undefeated in family roundball matchups although no official record-keeping exists.

Besides citing his father as a major influence, Ramirez also offered “my grandfather who passed away in 2013 — he was a force who taught me everything about being a respectful young man.” 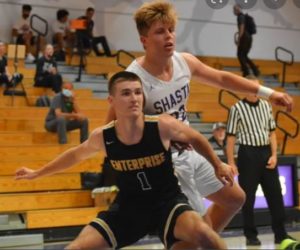 As a freshman, “I was a lot skinnier and more of a spot-up shooter. I was a shooter and more of a hustle player as a sophomore, buying into my role and giving my team what we needed. Now, my defense and tenacity are better. I play with a lot of heart and grit and I’m super dedicated to the weight room.” Lifting may have started as a necessity as he was positioned in the five spot as a sophomore and usually squared off against taller opponents but now it’s a lifeblood. “Now, I’m a lot bigger and stronger with a close handle and I can get to my spots on the court and attack players, scoring on anyone, as well as defending positions 1-5.”

Asked to detail a best basketball moment, Ramirez said, “my best moments are my team’s best moments.” Such as “beating Foothill High, the #1 team in the area, by one point. We prepared by watching film and everyone bought in, everything clicked.” That 2020 contest, a 51-50 home court victory, had Ramirez paired up against a 6-foot-7 opponent and finishing with a team high 13 points.

Ramirez will major in mechanical engineering major. “People tell me you can’t do both” (a challenging academic path while playing college basketball) but that’s simply another personal challenge to conquer.