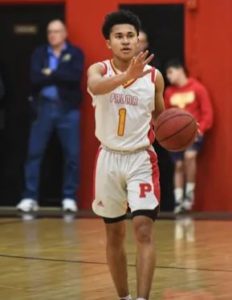 Whether by dribble, pass or shot, offense is initiated near the top of the key and beyond, making the area an essential pressure point defensively. Asked to detail his best basketball skills, Palma High point Nate Jean-Pierre quickly offered “definitely defense” as his initial positive attribute. Proficient at forcing his opponent off-kilter, the 5-foot-10 senior began taking thwarting his matchup seriously “way back in middle school” and is similarly accomplished at positioning himself for charges plus helping out teammates.

Palma Coach Kelly Lopez is in agreement. “He’s a great defender and can pick up at 94 feet.”

Lopez added, “Nate’s an athletic, traditional style point guard. He’s unselfish on offense and makes the right play. He’s a pass-first guy who understands when he should attack, and when someone else on the floor has an advantage and he works to get them the ball. Nate is also great in transition and can finish at the rim with both hands.”

Jean-Pierre is a solid mid-range shooter who is working on consistency with his three-point shot and describes himself as a proponent of “making the extra pass on offense.”

“Nate has started on the varsity team since he was a freshman,” Lopez continued. “He leads by example and understands he can’t push and motivate his teammates if he’s not doing everything with maximum effort and precision. I love coaching Nate because of his outstanding work ethic, his desire to get better, his will to succeed, and his willingness to take tough constructive coaching.”

Playing varsity both as a freshman and a floor general would be a Daniel in the lion’s den circumstance for most anyone but Jean-Pierre modestly recalled, “there was a lot to learn but the upperclassmen (on the team) really helped me out.” 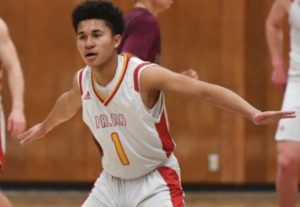 Jean-Pierre displayed local loyalty, playing with the Seaside’s Finest travel team during springs and summers. Coach Leo Seymour is both enthusiastic and appreciative, offering, “we wouldn’t be where we are today without Nate and Jamaree Bouyea (now at USF). Nate can get to the rim at will and he creates for others.” Maybe a little too much concerning the latter. “Sometimes, he’s way too unselfish.” Seymour also noted Jean-Pierre’s defensive effectiveness. “He just understands what we expect and does it.”

However, it was soccer prior to hoops for Jean-Pierre until the influence of his older brother prevailed. “My brother played basketball and I picked up a love of the game from him.”

Another element forcefully on display is the adoption of his family’s ethos. “My parents, they work so hard.”

Jean-Pierre owns a 3.6 grade point average and will play anywhere at any level but “I would love for it to be in California.”