Eric Bossi: “After getting another look at combo guard Logan Johnson, we feel that he’ll end up with some high major offers before summer’s end. He’s probably more of a natural two guard, but the tools to play point guard for extended stretches are there and he can create off the dribble. Fresno State (where his brother Tyler Johnson of the Miami Heat played), St. Mary’s, Santa Clara, Utah State and others have offered while several Pac-12 schools are tracking him closely.”

»  Read more in-depth analysis of the basketball recruiting process in my `Recruiting is a Seriously Funny Business’ cornerstone article. 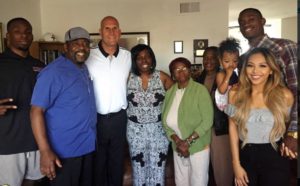 Moving from the bottom of California to the top: state champion San Diego City College to Humboldt State 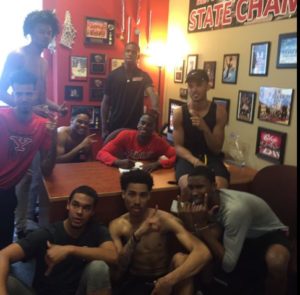 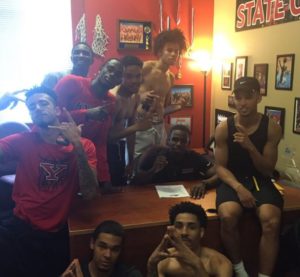 “Congrats to “Mere Money” on signing to @HumboldtSt_MBB with his Knights Fam & Brothers!”

Skyline Basketball: “Congratulations to Justin Gutang (Burlingame HS) who signed a full scholarship to continue his career at College of St. Benilde.” The school is located in Manila in the Philippines.

In the not too distant past, we’ve been critical of some recruiting analysts who are just too hyper over certain prospects. This is not knocking the kids who have no control over what is written about them but rather the adults. Now maybe what was written was actually believed, but too often the numbers weren’t bearing out the accolades.

In the last EYBL session, James Akinjo  enjoyed productive and efficient first games on different days but sagged during the second and fourth contests. We lauded him for his early production but noted that consistency was absent and that star players make positive impressions at each and every matchup.

In this weekend’s EYBL session, Akinjo…

6-foot-3 guard Zarion Walton will be playing for Coach Steve Ball and Napa Valley College. He’s out of Bethel High (Vallejo) and played both basketball and football this season.

The Nike EYBL was taking place in southern California this weekend:

James Akinjo was en fuego with 23 points on on 6-11 overall shooting, 3-5 from long distance and 8-10 at the foul line. He also led with five assists and two steals.

Junior Touré’s 12 points and eight boards led in both categories. 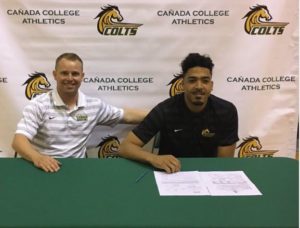 Mike Reynoso: “Congrats @dkimble12 on scholarship to Alaska Fairbanks! As well as being named “Student Athlete of the Year”. Great young man. #coltfamily”

The 6-foot guard averaged 11.4 points and 3,0 assists this season for Cañada.

Yuba College Men’s Basketball: “A great way to end the year!! Yuba College acknowledges their best of the best and two Yuba Basketball players take home two of the biggest awards!! Jihad Woods named “2017 Male Athlete of the year” to go along with his League MVP and 1st team All-State award. Donald Jackson unanimously voted “2017 Yuba College most inspirational athlete” after overcoming incredible odds! Two of the best young men I’ve ever been around and they deserve everything that they are awarded!!!”

Quinn Clinton is headed to St. Mary’s. He’s a 6-foot-4 2018 guard out of New Zealand who was earlier committed to New Mexico.

Here’s a January 2017 article on his Lobo commit.

Are the Gaels now going to develop a Kiwi pipeline?

Ohlone College Men’s Basketball: “Earlier this week, the Ohlone Renegades had another player commit to a 4 year school. Freshman Aussie wing Shaquille Maharaj will join Camosun College (NAIA) in British Columbia, Canada. We are excited for him and wish him the best of luck as he will finish the rest of his college career as a Charger! Go Shaq!”

John Murphy: “John Parsons has accepted the job as the new boys basketball coach at Half Moon Bay High, he said.”

Team Arsenal: “Andre Kelly just received his 2nd offer today. This one has come from CAL! Kelly continues to emerge as one of the country’s top forwards!”

He may not be 6-foot-10 but he produces every game. It’s rare to see an off-night from him.

Washington State offered him on Thursday so he probably has moved past the Mountain West Conference level of recruiting, possibly WCC also.

»  Read more in-depth analysis of the basketball recruiting process in my Recruiting is a Seriously Funny Business cornerstone article.

The article above is dated 4/28 and has previously been posted here but some sites are just discovering the announcement. Inglima has already brought in Evan Zeller from CS Monterey Bay—even as an interim—so imagine what he can do with that tag removed.

The next edition of the Daily Dose will be published Tuesday a.m. 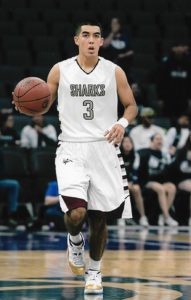 Linfield College (OR) is losing its top assists player to graduation, and that’s where 5-foot-11 Sandor-Rene Rodriguez enters the picture. Out of St. Francis High in Watsonville, his role has always been to set up others and that will remain his guiding principle on the court as he moves on to Coach Shanan Rosenberg and the Wildcats.

Named the Santa Cruz Coast Athletic League “Most Valuable Player” for his leadership and overall effect on the court, Rodriguez averaged 9.2 points, 5 assists, 5 rebounds and 1.5 steals this remarkable season and helped power St. Francis to the championship game in the state finals.

The background on his decision…

Out of Washington High in Fremont, he averaged a very well-rounded 12.9 points, 6.4 assists and 5.0 rebounds this season

The 6-foot-4 Christian Carroll averaged 11.5 points plus 3.6 assists this season while shooting 46%, 40% and 76% respectively. He’s out of Golden Valley High in Merced.