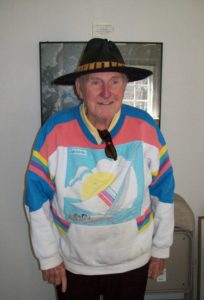 “Why are you so congenial?”

A 16-year Montevalle resident along with his wife Pat, Healy has encountered his share of ups-and-downs, including one incident more serious than most of us will ever face in our lifetimes, and yet he makes Dale Carnegie look like a piker. When you are in the area behind the Mill, you’ll more than likely be warmly greeted by him and depart feeling uplifted by the encounter. Perhaps it’s because Healy suffered an accident when he was a youngster and probably isn’t supposed to still be with us.

“I was shot in the head when I was 11,” he recalled. “My brother and I were out hunting and I got to a good spot to shoot. My brother began to go further on to flush out the birds and rabbits but he slipped, fell down and his gun accidentally went off. A .22 caliber bullet went into the left side of my forehead and exited the right.”

Help was summoned and Healy was taken to the hospital. A family acquaintance who was a brain surgeon was summoned from New Orleans. Because his trip took three days, Healy was stationed near the morgue for 72 hours as matters did not look promising. The doctor arrived, examined Healy, and declared he could operate and get Healy back on his feet!

“I missed a year of school recuperating and I couldn’t play ball sports anymore because getting banged on my head would cause a new problem.” Later on, Healy twice accidentally hit his head on furniture causing him to temporarily go blind, but doctors were able to remove the fluid buildups and restore his sight.

Coming from Richmond, California, Healy grew up in a Standard Oil Refinery family. “Two of my father’s brothers worked there for 50 years,” he said. Healy began at Standard Oil performing control room dial readings but gave notice after a few years. It shocked his family. One of his uncles reacted, “you’re quitting Standard Oil. It’s pretty hard to make a living on the outside.” Two of his uncles spent 56 years at standard Oil.

Having an A.A. degree, Healy enrolled at San Jose State University as an art major. “My brother-in-law worked as a stress analyst for [McDonnell] Douglas in southern California and would send me drawings, asking me to make models of them. I did a bunch for him and he kept them on his desk. One day, some of his colleagues asked about the models and were told ‘my son-in-law makes them.’ They told my brother-in-law that I should check for work with aerospace companies as a model mechanic.”

“So one day I was driving through Sunnyvale and saw the Lockheed Employment Office. I stopped in to ask questions about model mechanics, and they told me they were hiring illustrators and that I should try it for 90 days. 90 days became 33 years even though I didn’t plan on working for Lockheed. I became a company commercial artist, sitting with the engineers where they would talk and I would draw. Later, I would present a finished drawing.”

Healy also had no plans to come to Montevalle. “I didn’t really want to come here, I wanted to go north” as his sole surviving brother, one of six plus a sister, lives in Grass Valley. But wife Pat’s two sons, who both worked at Lockheed as did she, lived in Felton and Ben Lomond respectively. “She wanted to follow her kids. So we did, and here we are.”

“We would go to Felton for the kids’ birthday parties. One day Pat said ‘I know this real estate broker who lives over in Montevalle.’ We visited her, came back a month later and asked her if any places were for sale there. She took us to where we are at now. We didn’t look at any others.” That was September 2001.

Ask Healy about the Count Basie, Tony Bennett concert he worked at as an usher and he’ll tell you a surprising story. In fact, get him to talk about Frank Sinatra, Willie Nelson and all the celebrities and performers he became acquainted with while he and Pat worked behind the scenes at the Circle Star Theater, the Paramount Theatre, the Flint Center and others. It’s better than getting any scoop from TMZ.

Also inquire about his ever-present dark brown hat that he picked up at a Nevada City garage sale in 1972.

If Montevalle needs an official greeter, Glenn Healy is your man.