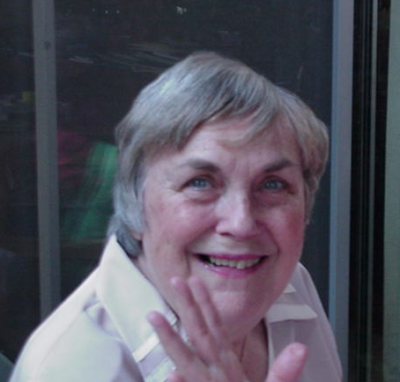 What do St. Louis, Fort Wayne, Nashua, Rocklin, Sunnyvale and Scotts Valley have in common? Give up? The cultural scenes of these municipalities have been blessed by the musical contributions of Marie Cotterman. Born in St. Louis, she credits two opportunities for her lifelong kinship with music.

“I attended St. John’s Academy, a K-12 school in south St. Louis where there were never more than seven students in a class. There I had my first singing tryout was and was taught to memorize. During the Depression years, we (Marie plus an older and younger brother) went to the Haugen Conservatory of Music two blocks away. It cost $7 a month for all three kids. All of us loved it. I took singing, piano and dance lessons. We never got into any trouble after school because we were always there. I do want to say that Mrs. Haugen had the patience of a saint.”

Marie’s family was quite the musical household. “My Dad had a good voice but my youngest brother, Carl, had THE voice in the family. My Mom played the piano, and my Dad the violin.”

Sometimes it’s the little things that have a lifelong effect. In this case, it was Marie ‘discovering’ a heralded singer. “In high school, I saw Marian Anderson [one of the most heralded contralto singers of the twentieth century] in concert,” she recalled. “I said to myself, ‘I can do that.'”

Not long afterwards, she earned a music scholarship to Washington University in St. Louis.  Later “I took a test for a job in the Adjutant General’s Office and got the job. It was in downtown St. Louis and we supplied food and things for the daily life of the troops.”

Marie was also a hostess at the local USO social club (the match.com of its day) and it was there on March 17, 1946 that she met a handsome chap named Bob Cotterman.

She also tried out for the St. Louis Municipal Opera and was accepted. “It was a once in a lifetime thing. I had a ball and met a lot of great people.” Earning $150 a week, a remarkable sum in those days, Marie bid farewell to the AGO.

Her musical career continued to grow. In 1947, “Bennie Raynor took a liking to me and became my agent.”  1948 was a decisive year. “Bob and I got married” and eventually became parents of son, Steve, and daughter, Valerie.

Raynor presented her with a different kind of gig, one on television which was slowly becoming more popular. “I had an opportunity in local television. It involved chatting with local dignitaries and singing a song or two.” But accepting it would have placed too much on her proverbial plate.

The Cottermans then moved to Fort Wayne, Indiana where Marie raised the children and sang in various churches. Then it was off to the East Coast, Nashua, New Hampshire, specifically. “I tried out for Actorsingers of Nashua,” a community theater group, “and was accepted.” Besides also teaching voice on her own in the community, “I tried out for the part of Bloody Mary in ‘South Pacific’ and had the most fun doing that show.” She also played Ethel Mermen’s role in “Anything Goes” where she performed 12 songs, eight of them solos.

Eventually she and Bob moved to Sunnyvale (for 20 years) where she received this gracious compliment from her accompanist Brad Slocum as the two performed in various church locales: “Marie, you’re the undiscovered star.” Next, the Cottermans moved to Rocklin and finally Montevalle in 1998, the year of the Cotterman’s 50th wedding anniversary.

She participated in various Montevalle events “but I never sang outside of Montevalle. My favorite songs to sing are “The Star Spangled Banner,” “The Lord’s Player,” and “Mary, Did You Know?” “Singing gave me up, old took over,” explained Marie. “I sing in private, I’m never going to give that up because music is my oxygen. I never thought I was the best but I was the loudest.”

She modestly offered, “In my own way, I accomplished a few things.”  Yes, she has. Just ask her musical colleagues, her audiences and certainly her family.