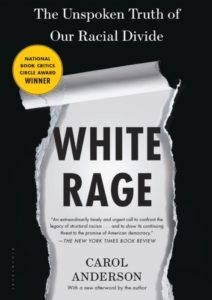 Carol Anderson’s book “White Rage The Unspoken Truth of Our Racial Divide” considers the myopia, if not chosen ignorance, of most United States citizens who can readily recite such historical events as the murder of Martin Luther King and, to a lesser degree, that of Medgar Evers, as well as nine worshippers being murdered in a Charleston, South Carolina church in 2015, the 1965 conflagration in Watts as well as in Detroit during 1967 but fail to see the daily root causes-and-resulting effects vis-a-vis minority life in this country.

The failure of a broad percentage of our populace to connect-any-of-these-dots along the racial spectrum to both historical and more current events sits alongside the majority’s primary reaction to such being applause for the application of greater oppressive law and order, and worse. Perpetuation thrives.

Anderson details what is conveniently overlooked: the unacknowledged daily violence in all its forms conducted by courts, legislatures and all other elements of government against minorities throughout United States history.

A critical point: ‘Black rage’ has long been applied pejoratively so why minimal, if at all, usage of ‘white rage’ alongside no negative connotation?

Throughout her book, she utilizes past and present day critical truths in making her points, including:

Anderson provides so much missing and important history which won’t ever be found in high school textbooks.

Anderson also has a new book out titled “One Person, No Vote How Voter Suppression Is Destroying Our Democracy”