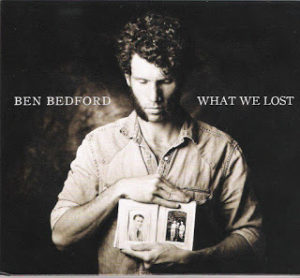 It’s one of life’s ethereally divine moments, hearing a compelling song yet not knowing the title or the artist. Immediately, nothing else matters. All focus and energy shifts to discovering the genesis of those words and sounds, it’s a siren song journey but with a happier conclusion.

Thus was my awakening to Ben Bedford, a process containing similarities to Christopher Columbus ‘discovering’ the New World since Bedford has two previous releases and a successful tenure as a singer-songwriter. His musical tree obviously sprouted in the forest some time ago but this convert must have been too focused on various branches or twigs to notice.

With Bedford, neither narrative nor rhyme is ever forced. His evocative lyrics present the living and the dead, the past and the present alongside all the twists and turns that design life. In many of his offerings, it’s a greater understanding either being sought or presented. Despite his relative youth, his music is remarkably old soul-like.

Bedford’s vocals are clear and precise, his musical accompaniment connective companions to his words. A number of his works are connected to people and places in his home state of Illinois.

Notes on various of his songs:

“John the Baptist,” opens the release, with the title character singing of baptism and resurrection, the superseding of the Old Testament and surrendering to the single path towards eternal life yet not utilizing literal directness through employing those specific terms. Such is his wonderful elevation of artistry. Near the beginning:

Duly note the odds are heavy that Chris Smither will want to record this cut some day.

With resonance from Ron de la Vega’ cello work, the title cut “What We Lost” is about a time and life remembered but now impossible to recreate. It’s the taste of victory in war soured by a very personal loss, the feeling of the collective not meshing with that of the individual.

Both of these songs epitomize a form of Faustian bargains of sorts, a giving up of something for what many, but not all in the end, deem is better overall.

Bedford sings of trigger events in the tumultous life of prairie troubador-poet Vachel Lindsay in “Vachel.” The opening lines offer a sense of Bedford’s lyrical touch:

“The hand of an artist is the open mind of god
pulling paint from the mud, the prairie wind to song…”

Next are “Fallen” and “Empty Sky,” separate creations but twined by the theme that love is truly free of verbal and written definition. It simply is, a manifestation visible in multiple embodiments and never improper.

“Cloudless” details the integrity of the search for meaning even when the target is less than fully defined and the journey is difficult for all. Bedford sings:

“The Ballad of Harlington Wood” zeroes in on Wood’s work as mediator in the Wounded Knee standoff between American Indians and the U.S. government in 1973. It brings to mind Robert Earl Keen’s “Shades of Gray.”

Tom Irwin wrote a lengthy, informative article on Ben Bedford and his music in November 2012.