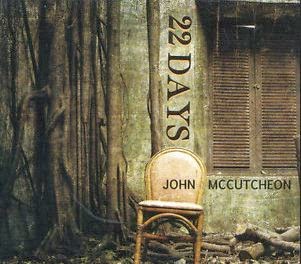 The sense that creativity wanes with the turning of the calendar page is absolutely turned on its head by John McCutcheon’s new release “22 Days.” The birth father to 36 creations in his musical lineage, the latest demonstrates that age certainly hasn’t diminished his imagination.

What was the genesis for this offering? Paying homage to friend and musical comrade Vedran Smailovic who faced down death in war torn Sarajevo during the Balkan War by publicly playing a classical music piece for 22 straight days in honor of that number of civilian deaths there due to a mortar attack.

So in late May 2012, McCutcheon spent 22 consecutive days writing and composing. Covering topics illuminating a wide spectrum of emotions and traits, his worldly collection depicts love, hate, fear, courage, humor and tragedy and more as he sets his words amidst celtic, shanty, Appalachian and general folk tunes.

With smooth vocals that neither shout nor scold, McCutcheon sings of recent sordid history in Pakistan, peace substituted for war, aging gracefully, southern cuisine (apparently not an oxymoron), the void due to the absence of a longtime mate, mushroom hunting (of which it would be wonderful if Stan Rogers were still alive to take on this song — maybe Garnet will do so), the work left for the backs, arms and shoulders of immigrants, a pub patron’s dream/nightmare, the war loss of a lover, mining destruction, the infinite beauty of song and and the vagaries of viewing those who weave in and out of our lives.

Every listener will emerge from listening with his and her own favorites. For this reviewer “Of an Age,” stands out but possibly you have to be more than a few decades into your life to truly appreciate it.

“Tonight” reeks of Harlan County due to both lyrics and very effective banjo but the genesis for the song is unfortunately far more widespread.

In the broadest of statements and employing an ample brush, McCutcheon has never penned a song even verging on the why-did-he-record-that territory. His musical ear remains keen as well as consistent.

On that aspect, why isn’t McCutcheon a Kennedy Center honoree? There may not have been millions earned or entertained but, of the quality, proficiency and deservedness, there can be no doubt.