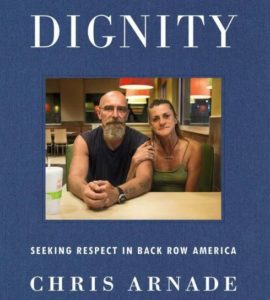 In Chris Arnade’s prose and photo book “DIGNITY Seeking Respect in Back Row America,” he explores those surviving in the back row, the lower and lowest economic echelons of America.

A former Wall Street trader of 20 years, with a comfortable house in Brooklyn, Arande was a resident of society’s front row. He left behind stifling life in a small Southern town by attending a series of colleges, culminating with a physics degree from John Hopkins. However, his financial work brought yawning emptiness. Any degree of fulfillment was absent.

So he began traipsing though Hunt’s Point in the Bronx, talking with residents and taking photograph of his subjects even after being warned by so many ‘outsiders’ that it was not a safe area to enter.

Upon a mutual parting of the ways from his lucrative banking job, he enlarged his travel itinerary to the entire country, seeking down-and-out areas of towns and their residents. Among his many stopovers: Gary, IN, Portsmouth, OH, Youngstown, OH, Selma, AL, El Paso, TX, Amarillo, TX, Bakersfield, CA, Cairo, IL, Milwaukee, WI, and Lewiston, MI.

One of unusual discoveries: McDonald’s serves as a community center for so many, homeless and housed, in economically depressed zip codes. Some customers, primarily seniors, spent an entire day at Mickey D’s, getting out of the house while catching up and chatting with friends. Arnade noted the proximity of a McDonald’s as a critical component for such residents who don’t have the luxury of senior centers.

Although he provides no answers (are there any that are currently politically feasible?) for poverty reduction/elimination, Arnade explores many factors involved in producing lower income lives. He doesn’t cite studies or statistics but rather asks his subjects for their takes.

This is a moving book especially because the photographs of the subjects makes what is said and written within it human, and therefore, real.